Here we show a variety of scene set-up approaches in your main 3D software/renderer and talk about their advantages and disadvantages. The example we use here is the Stanford Dragon with a small chrome ball.

By far the simplest scene set up when using IBL is a scene that contains only the subject (the objects you want to make an image of) and an IBL sphere that is set to be visible – that’s it. This extremely simple scene setup can produce stunning results. Here is the HDRI map we are using to light surround the subject. 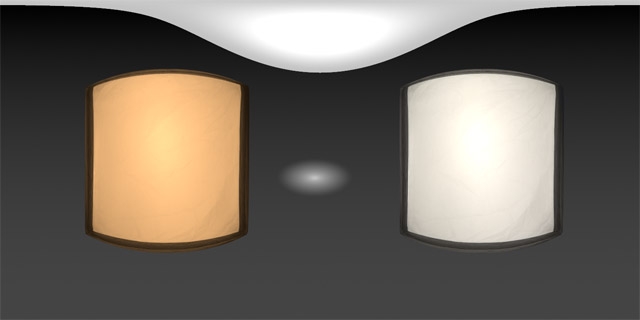 And here is the resulting rendering, with only the IBL sphere and subject in the scene. 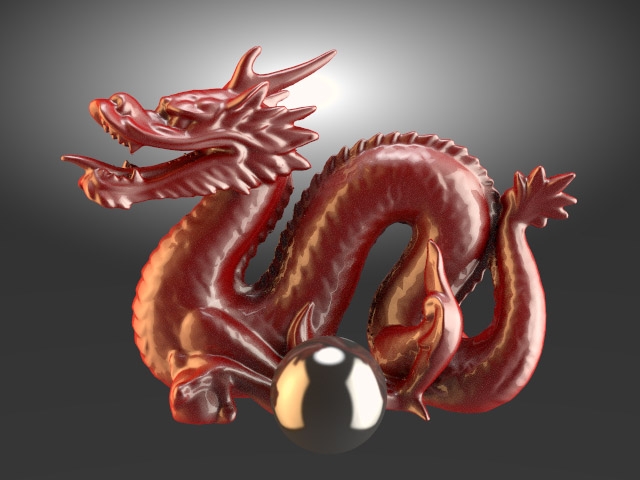 For such a simple scene set-up – with no other geometry apart from the dragon and ball, it’s a very polished image. The only problem is that the object is floating in the air. A photographer would jump with joy at the idea of being able to suspend his subjects in mid-air like this. Why? Well if you’re taking a photograph of a product like an electric shaver or hairdryer for a catalogue, then you really don’t need to it sitting on a base or being visibly supported – that’s a distraction. Whatever the subject is sitting on or is being supported by will become part of the shot and more importantly will be seen in the reflections in the subject and will also limit where lighting/reflections can be placed.

But here in our virtual 3D world, with the subject alone floating in the scene, lighting can be placed on a HDRI map to reflect from any direction – so you have total 360-degree control of where reflections/highlights are placed. In the above examples of a shaver and hairdryer – this technique was used and is a great way to light a shot like this.

You can also see in the render above how a light source has been placed behind the shaver on the HDRI map to create a nice glowing background effect. There was no need to model a background or create another image as a background image – it all comes from the HDRI map. When you use this technique it always looks realistic because the background is also fully interacting with the subject in reflections and refraction. You can see the orange glow effect reflected in some parts of the model. So, it doesn’t look stuck on and fake.

You can take this effect to an extreme, see here this example. 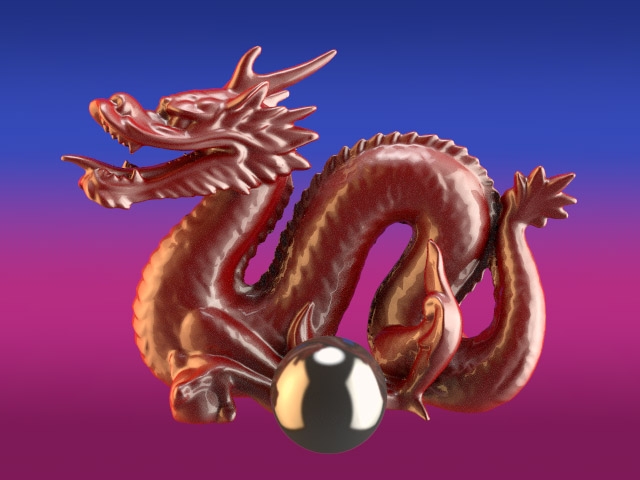 Here we placed a light in HDR Light Studio behind the dragon on the HDRI map with a colourful graduation, here’s what the map looks like. 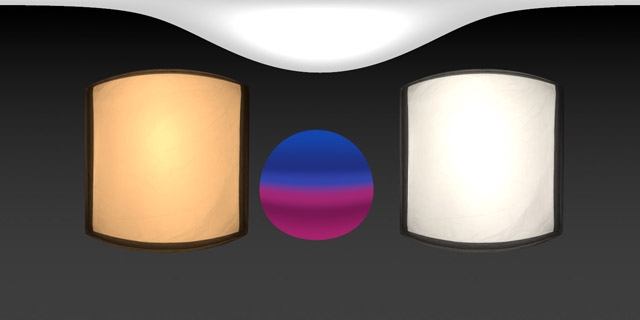 It’s pretty cool to be able to create a background effect like that via the HDRI map. It keeps things simple, and simple scenes render faster!

Here are some more examples of floating objects lit with HDRI maps:

If you were making an image for a catalogue and it was going to be used as a cut-out to go onto a white page or white web page, then it’s very important to make sure the object has been shot with white content behind it.

If you were to cut out an object that has been photographed with a dark background (with no illumination or reflections coming from behind) and put that image onto a white page, it will look odd because the perimeter of the object will be dark, almost outlined – therefore it will look cut out and stuck on. 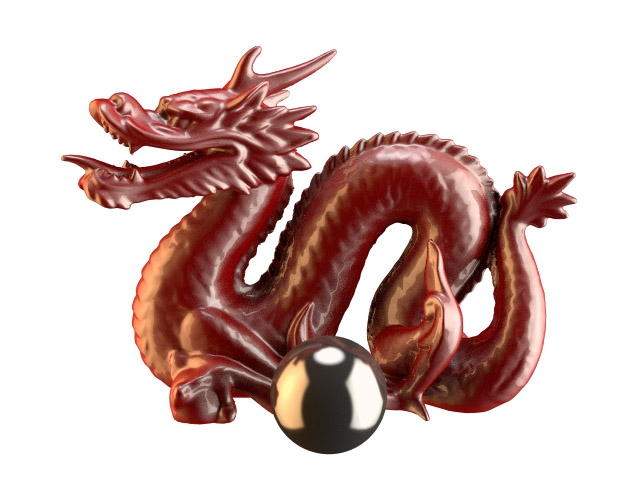 Do you think that the above image doesn’t look quite right? If this had been lit with a white background in the HDRI, the edges would not look so harsh. Let’s fix this by producing a new render, but this time placing a large white light behind the shot, so this white background reflects in all the glancing edges of the subject. 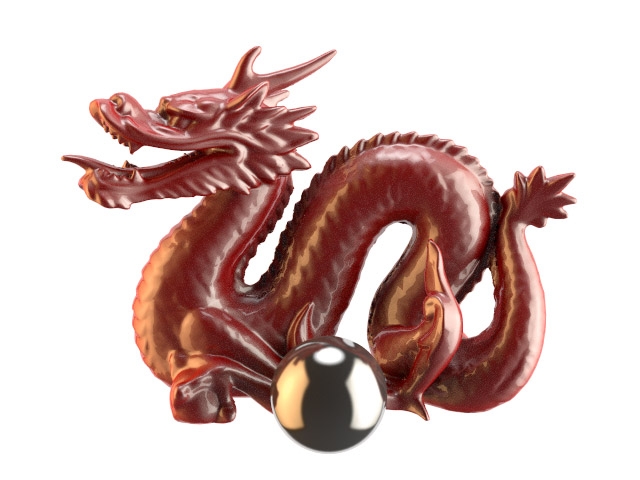 This looks much better. The white area is reflecting in the edges. This dragon looks at home on this white background.

But what if we don’t want a shot with the subject floating in the air? Say we have a product that would sit on a desktop for example, and we want it to look grounded. The next step is to add a floor to your scene.

We can easily model a plane and add this into the scene and assign a white shader.

So what does this look like when lit with our HDRI map. 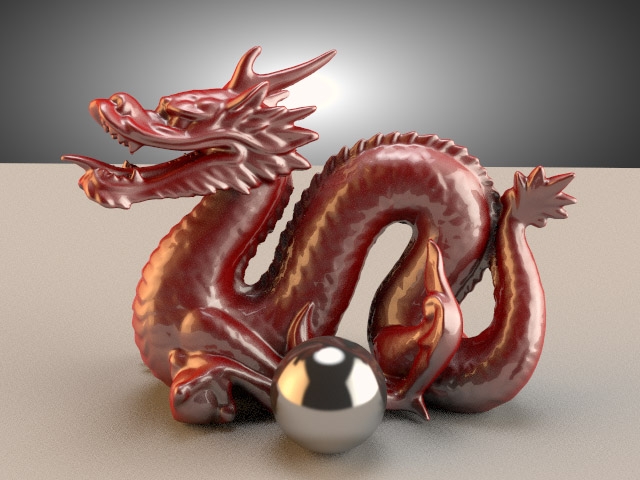 The first thing we see if that the floor is reacting to the color of the lighting – which is very warm from the left. This has made the entire white floor a cream color. Additionally, we can see that the floor is now playing a key part in the shot – taking up most of the background, stopping reflections from the HDRI map reaching the surfaces that point downwards on the 3D model. We have lost a lot of control of the lighting for the subject by introducing a floor. The shot is now being lit by only the top half of the HDRI map. The lower hemisphere is obscured. Yes, this looks very realistic and the addition of the floor shadow is welcome to ’ground’ the subject.

The good news is we can have the best of both worlds – the original control of the lighting and the nice floor shadow.

This is done by assigning a shadow catcher material to the floor geometry and ensuring it is set with shadow casting off, so light can reach the dragon from all directions. Most 3D rendering software has an equivalent method of achieving a shadow catcher material. The result is only shadows are shown on the floor, other than that the HDRI map can be seen fully by the model. So, we gain back our 360 control over lighting and reflections, and the control over the visible HDRI too in the background. This is what the scene looks like with a shadow catcher applied.

You can see the nice shadows added over the visible HDRI in the background. You would never guess that this shot had such a simple set up.

This type of scene set up works very well for cars. Cars need to look connected to a floor in order to look good. So car renders need a good floor shadow.

Another technique is to assign a glass shader to the floor rather than a shadow catcher – this way it creates reflections in the floor, but still allows light and reflections from the entire HDRI to reach the subject. This technique is commonly used by photographers for studio shots of jewellery for example. 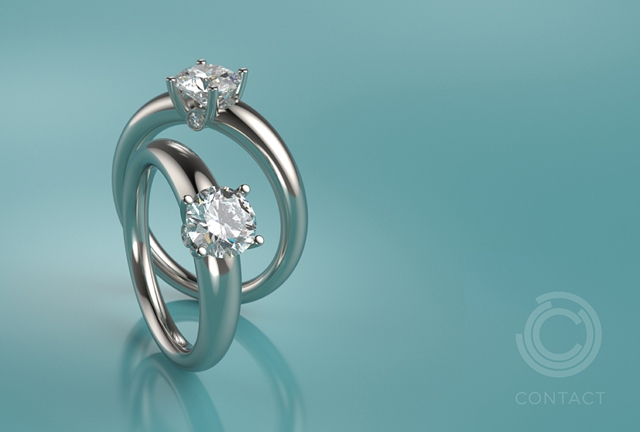 Another solution is to place your subject onto a plinth, such as a cylinder. It provides a very realistic appearance and allows the HDRI map to be seen by the vast majority of the subject. This can be a very visually pleasing method of presenting a shot. 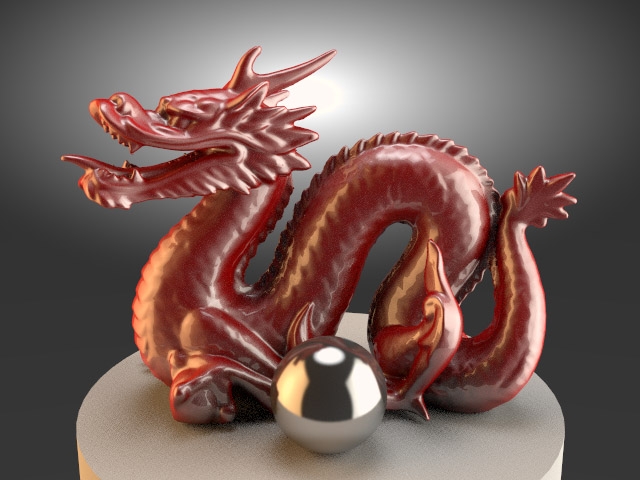 The advantage of this plinth approach is that is very realistic in appearance. The chrome ball here looks excellent with good looking reflections of the plinth itself. Presenting a product such as a watch or electronic device can look really nice on a plinth. It works well for pack shots too, here is a nice example.

The next approach is to model a scoop as the staging for the subject. 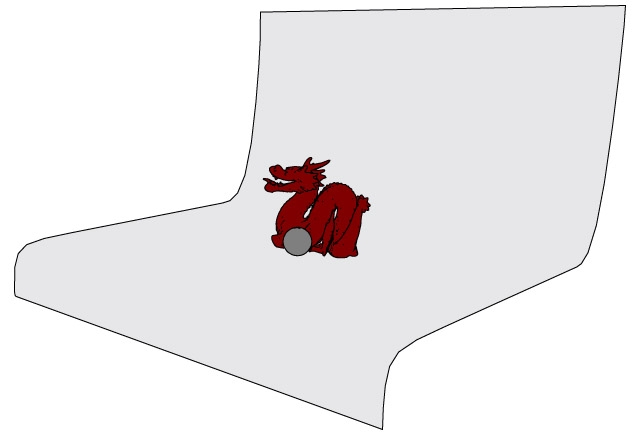 The scoop will fill the background of the shot. The advantage of this method is the realism of the resulting render. 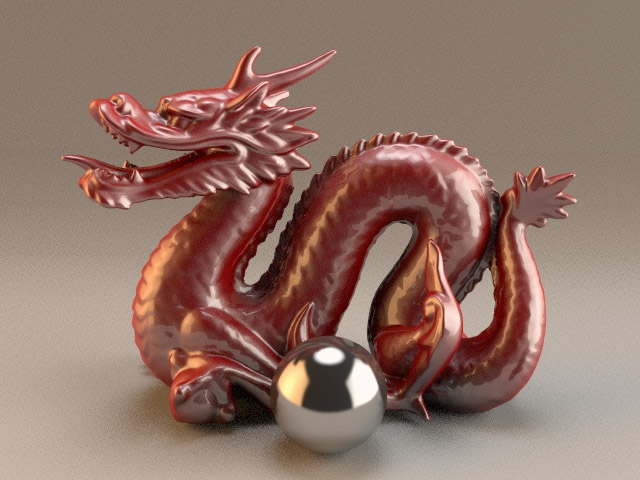 The scoop is producing a nice-looking background and the overall effect is very realistic because everything you see is lit by the HDRI map, so the illumination color is consistent across the entire image, and is also receiving the correct shadowing. A disadvantage of this approach is we reduce the amount of control we have over the lighting from behind and under the shot. To illustrate this let’s use a better example, a car shot with a problem. 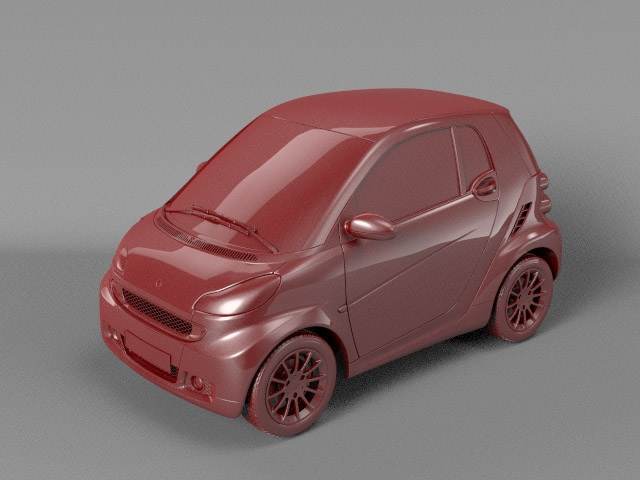 Here is a car lit with a HDRI and placed onto a scoop. It looks good because we get lovely interaction of the lighting and shadows with the scoop. It sits well on the floor as a result and is very realistic. However, because the HDRI map is outside the scene, the scoop has restricted where reflections and lighting can be placed on the car, the scoop is getting in the way. But there is a cheat to overcome this.

We can set the scoop to be invisible in reflections and turn off shadow casting on its geometry. This way we get all the same lovely shadows cast onto the scoop. But the car itself will not see the scoop in reflections, and will instead reflect the HDRI map that’s beyond the scoop. This gives us back total 360 control over the reflections in all areas of the car. 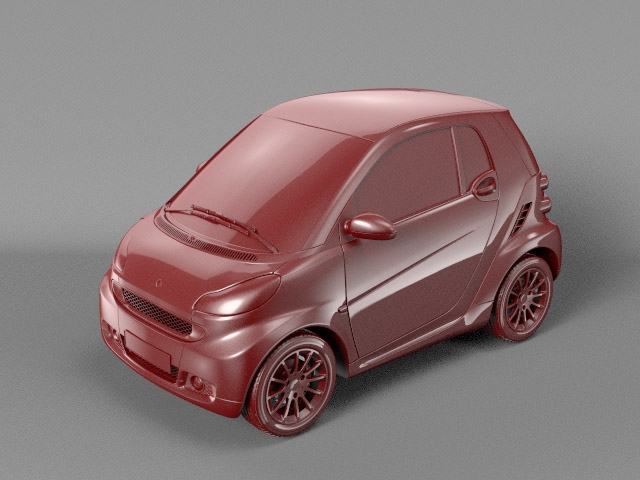 So, here’s the new render we made where the scoop is hidden from reflections. Wow, look what a difference it has made here. The soft box over the top of the car is now working well, plus the dynamic graduation on the side of the car has not been cut short. We have been able to place reflections exactly where we need them. The car looks more dynamic and better presented as a result. The scoop is not interfering with our reflections. It’s fake and a cheat, but the overall effect is very pleasing and realistic.

This approach does not suit all scenes. For example, in the dragon scene, if we hide the scoop from reflections, then the chrome ball looks shiny black and no longer chrome. 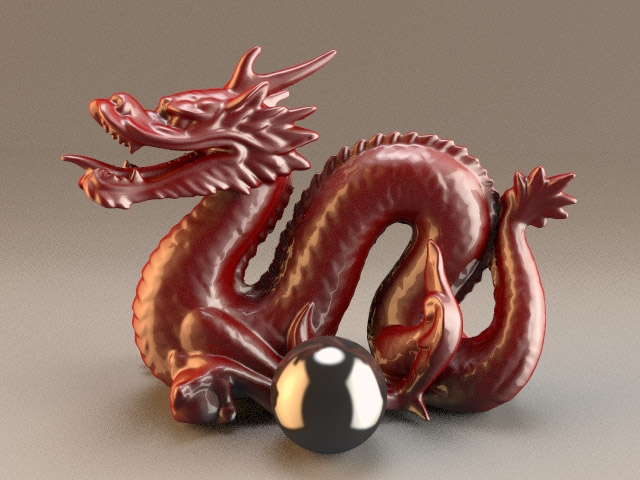 But if you are looking for a scoop effect in a shot like this one, there is another way to achieve this. HDR Light Studio can load a background EXR file of a scoop. So, the scoop can be within the HDRI map itself, and not modelled. This is a nice cheat. 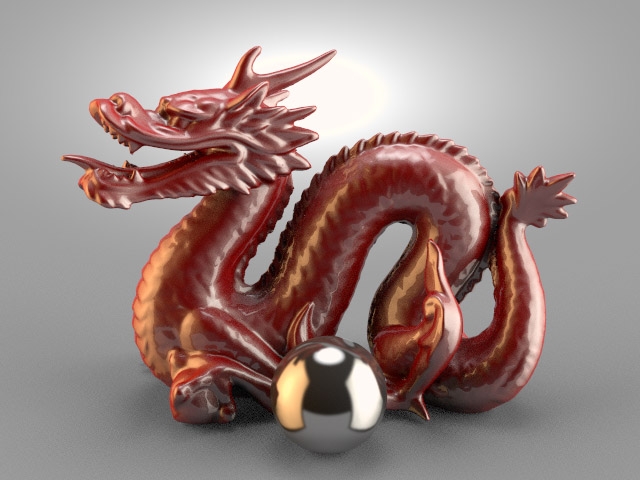 In this shot the scoop is within the HDRI map, loaded as a background base to the HDRI design. The advantage here is you can place lighting in front of the scoop in the HDRI and because this scene is back to only the subject, IBL and shadow catcher floor. It renders much faster than a modelled scoop does.

Above is the base EXR image containing the spherical view of a scoop. This was loaded into HDR Light Studio and additional lighting added to light the map. 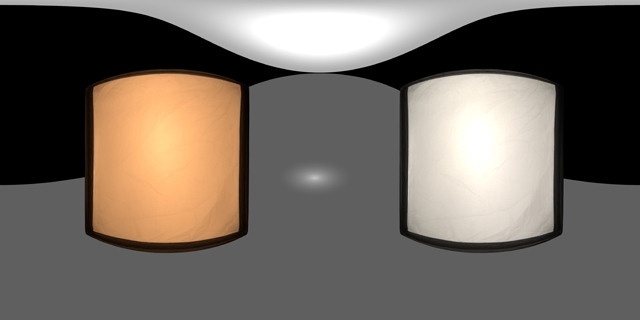 This entry was posted in Tips.