Size and Distance in HDRI Maps

Learn how the size of objects is represented in a HDRI environment. 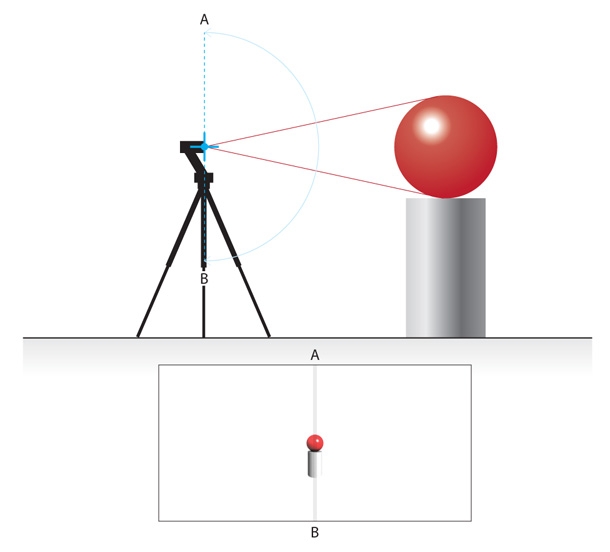 Let’s take some time to understand how the size of objects is represented in a HDRI environment. The most common type of HDR image format used for lighting in CG rendering is the Equirectangular format. This rectangular image format has a ratio of 2:1 and when mapped onto a sphere it correctly represents the viewpoint looking around a full 360 degrees in all directions from a point in space. These images can be created in a number of ways, but for the purposes of this discussion, lets imagine they are being captured with a Spheron camera system.

In the image above you can see the camera placed onto a tripod. It has a fish-eye lens which means it can view a full 180 degrees – from directly above it, through to the front of it and to directly below it – A through to B. This camera creates a lat-long image by capturing ‘vertical slices’ of the view as the camera rotates on the up axis. When all of the vertical slices are placed side by side then the resulting image is an Equirectangular image representing the total view seen by the camera. Clever stuff!

Above the red ball has been moved further away from the camera. The effect is that the ball is now occupying a smaller amount of the equirectangular image. This makes sense! 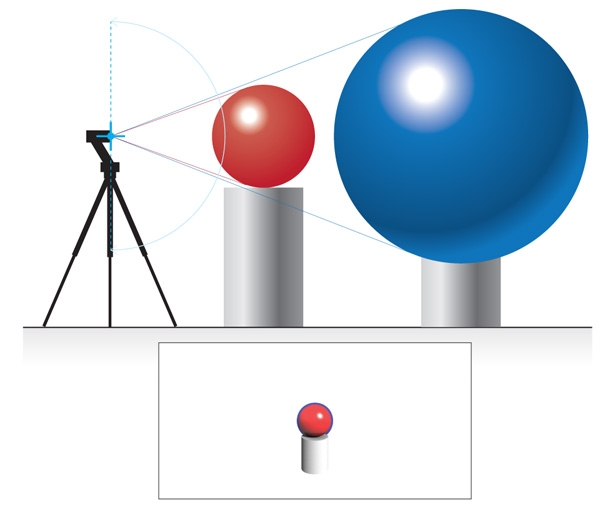 Now things get interesting. Above we see that the blue ball is huge compared to the red ball. But from the point of view of the camera, then they are about the same ‘visual’ size. You can only just see the rim of the blue ball from behind the red one. OK, I know, this is ‘perspective’ and is obvious when you think about it. But this reveals that in an equirectangular image, then there is no concept of actual size or indeed the distance of the objects from the viewpoint. Simply objects occupy a percentage of the ‘angle’ of the view – the larger the angle, then the closer or larger the objects are.

So, what does this mean when using HDR image for CG lighting? Well in the image above are 2 soft box studio lights. They both occupy the same angle in the view, so even though there are very different in size, they will look just the same on the equirectangular image.

For users of HDR Light Studio software then this relationship between size and distance in a HDRI environment is very useful to know when designing your lighting environments. 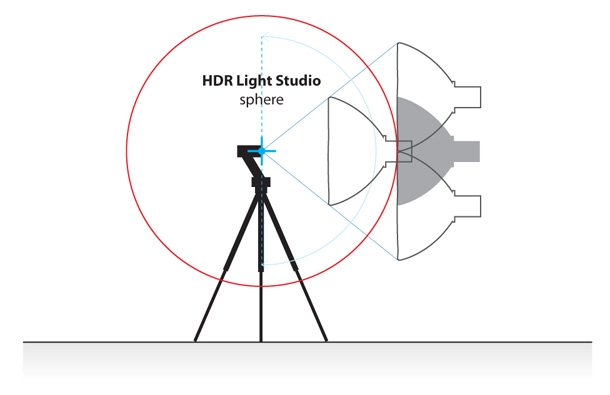 In the image above, you can see the dark grey soft box for reference.
To make the light twice the size – you double its size setting, this is perfectly logical.
But to make the light appear twice as close to you, you also double the size of the light.
It makes no difference; they have exactly the same effect in an equirectangular view.

This is why HDR Light Studio does not have a distance setting for the lights when they are on the HDRI map. They can be placed using position and size settings alone.

It is useful to know that in HDR Light Studio software, a light size setting of 50 will make it the same height as the lighting sphere. Therefore, if you wanted to design a light cube/tent, then you know to make each light 50 width x 50 height, so they form the sides of a cube. You can see this in the example screen grab from HDR Light Studio below.

This entry was posted in Tips.