HDR Light Studio is best known for the real-time creation and editing of HDRI Maps used for image-based lighting. However many people, even customers, are unaware that since 2016, HDR Light Studio also interactively builds HDR Area Lights in your 3D software. These Area Lights are created and controlled with the same ease of use as lights on the HDRI map - dragging and dropping and click/dragging to position them. The area lights are built and controlled in real-time and mapped with the live HDR textures from HDR Light Studio to control their appearance and illumination effect.

We are currently improving our plug-in connection for Cinema 4D, and I felt it was a good time to review the area light functionality in the renderers we will support, namely: Cinema 4D Physical, Redshift, Octane, Arnold, V-Ray (5), and Corona.

What is an Area Light?

An area light is a rectangular plane that's a light source in your 3D software - emitting light from its surface. Generally, you want this to emit light from one side of the surface only (but some can emit from both sides if you wanted). These 3D lights can be placed anywhere in your scene and scaled to any size and proportion. This area light surface can be seen in reflections in your scene, providing physically accurate results compared to old-fashioned fake specular highlights. Highlights are reflections!

Above is an example of a standard area light in Cinema 4D (V-Ray). See how the reflections in the objects come from the appearance of the light and are not fake specular highlights. The area light produces a nice soft diffuse illumination and soft shadows

How are Area Lights created in Cinema 4D?

Depending on your renderer, the area light can be created in several ways. Some renderers have a native area light type, created with a single click of a button, with various names like Area Light, Quad Light or Rectangle Light. For other renderers, the area light is created by making a rectangular plane, and then creating and assigning an emissive shader or light 'tag' to the surface. 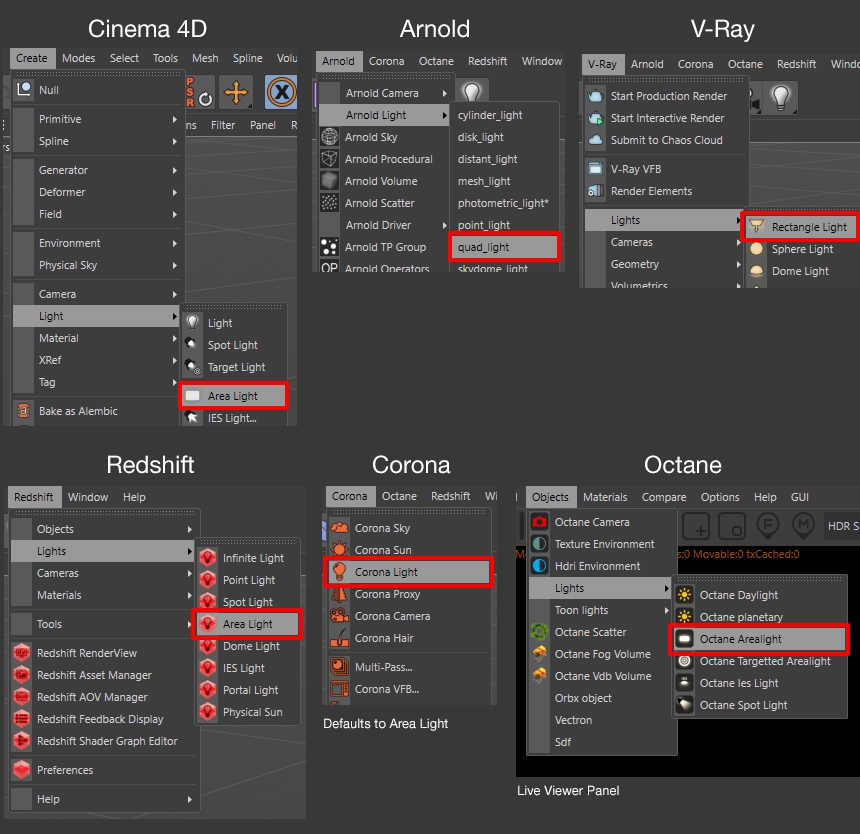 By default, area lights are solid white, but their color can be changed. Most renderers allow an image texture to be mapped onto the area light. This controls both the color and levels of light emitted, and the appearance of the light, which is especially importantwhen seen in reflections.

Lighting your scene with an HDRI map looks photo-realistic because of the accurate light and reflections it provides. Area Lights using HDR textures provide that realism too!

See how the renders lit with HDRI maps look so realistic. But the stock flat area light looks very fake.

Mapping HDR textures onto area lights allows you to create lights with different shapes simply based on the image being used. The HDR texture can be used to replicate any lighting appearance imaginable.

See how the texture changes the light from a square softbox to a hexagonal softbox.

If the area light doesn't support alpha, you may be able to see the black areas of the image in reflections. This becomes especially noticeable when the surroundings of the scene are not black. You can use the alpha to mask lights to have different shapes, and even to create lights with soft edges or transparent areas.

See how adding alpha to area lights controls their shape and softness.

By default, illumination is generally emitted in all directions from the emitting side of the area light - like a diffused photographic softbox. But some renderers also support a spread/directional setting, allowing the emitted light direction to be more focused, from the 180 degree spread, right through to parallel rays that act as a beam of light. In our next Cinema 4D Connection release, we have added support to control this directional/spread parameter where it's available: Arnold, Redshift, V-Ray. We have also produced a solution for Octane too, to mimic this effect.

Adjusting the spread/directionality of an Area Light

Most renderers in Cinema 4D treat each area light as a solid object in your scene. i.e. the light is non-transparent and will obscure any content behind it.

There are currently some exceptions...

Redshift area lights are opaque and don't support alpha, so they have hard black edges when a texture doesn't fill the whole light. However, when Redshift area lights are invisible to the camera, they are additive and translucent, which gets rid of the hard border - a handy hint to get rid of any unwanted hard edges seen in reflections.

If an area light can be seen by the camera, it can be desirable to hide it from the camera view, especially if it's between the camera and subject being lit. You would not be able to do this in real life, but it's a handy cheat you can use in rendering software. All renderers support this feature except Arnold - its area lights are always invisible to the camera.

We hope you learned about the potential of using Area Lights in Cinema 4D with your renderer. The ability to map them with an HDR texture with alpha provides a huge amount of control over the illumination and appearance of the light in reflections. The spread/directional setting enables even more flexibility, making the light behave more like a spotlight, through to a directional light. 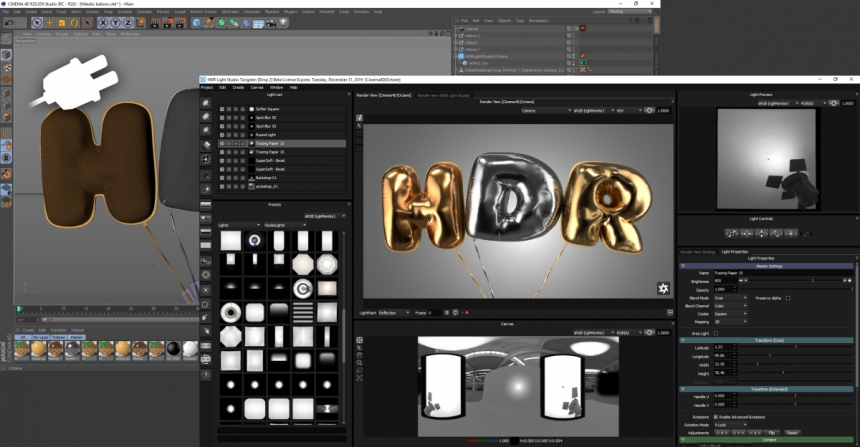 The HDR Light Studio Connection for Cinema 4D creates Area Lights for you in an instant and includes many high resolution HDR light textures to use on your lights. It's a really easy workflow that will save a huge amount of time. Do give it a try if you get the chance - especially when the new Cinema 4D Connection is released with our HDR Light Studio 'Xenon Drop 3' release.

Some of the HDR Textures that ship with HDR Light Studio.

This entry was posted in Cinema 4D.