Area lights produce realistic lighting when mapped with high dynamic range images on their light properties. The light intensity comes from the HDR textures mapped onto the area lights, and this produces high-quality reflections of the light source. The Blender scene needs to mimic real world lighting and HDR images on your area lights are the secret ingredient. Bright areas of the HDR texture will produce realistic lighting reflections - making your final rendering realistic. Using HDR textures on area lights is another type of image based lighting, but using the HDR image on each 3D area light. HDR reflections will bring your materials alive - so now it's time to shine and learn how to make area lights in your Blender scene.

There are two ways to create Area type lights in Blender:

Add an area light to your scene using the Add menu, and position it how you want. 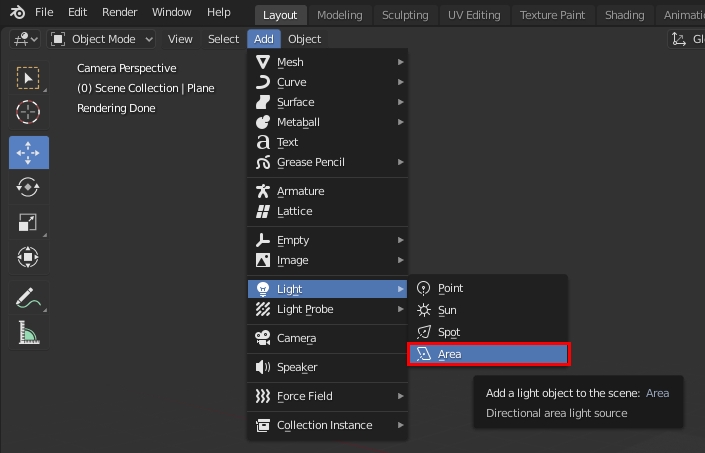 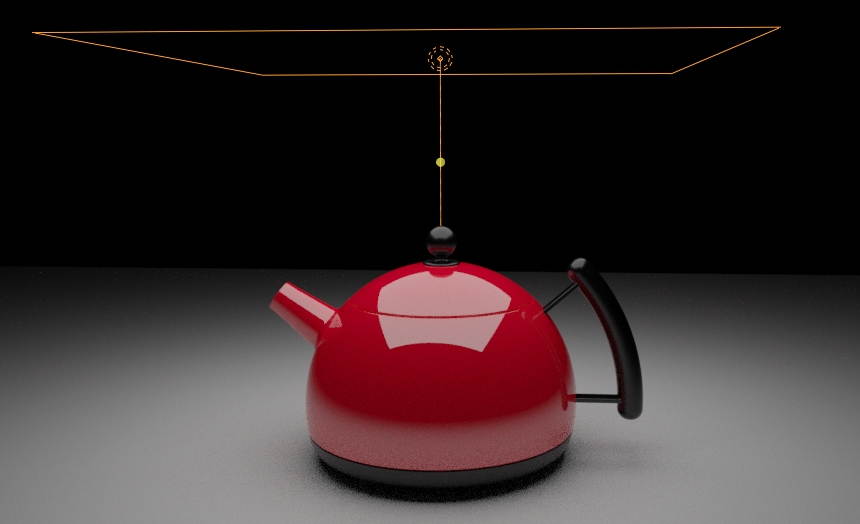 Next, in the ‘Properties’ editor, under the light tab, click ‘Use Nodes’ and then switch to viewing the ‘Shader Editor’ to view the node network. By default it will have an Emission node connected to a Light Output node. 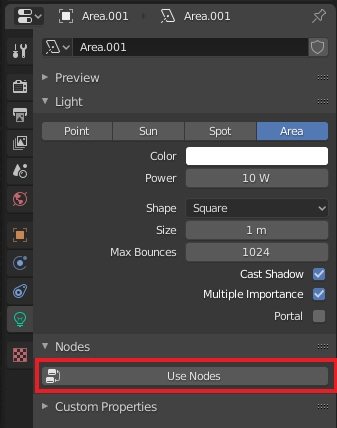 Setting up area light to use a node network

Switch to the Shader editor tab

If you just want a light with a plain colour, then this is all you need. You adjust the brightness of the light using the Strength value on the Emission, which was changed to 25 in the example above.

But we want to create a textured light, so we’ll need to add in some more nodes. First we’ll add in an Image Texture node and connect its colour output to the colour input of the Emission node. 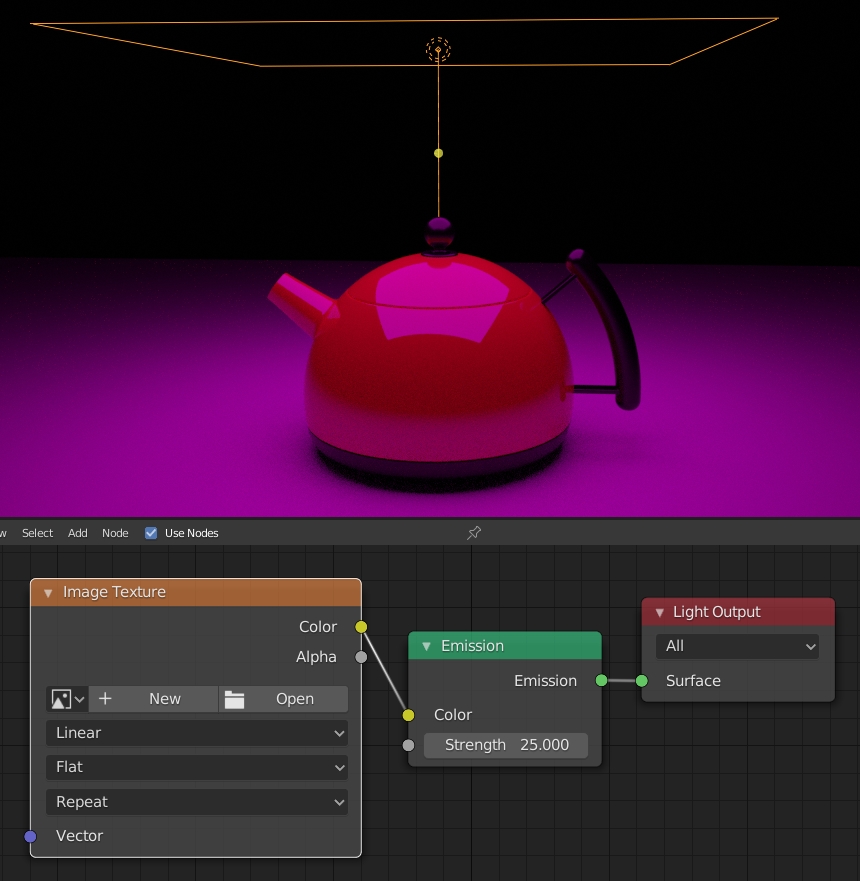 Your light will now be bright pink. This is because Blender doesn’t have an image file to use so it uses its default missing texture file, which is pink.

To add your texture click Open on the Image Texture node, this will open up the file explorer allowing you to select your chosen texture file. We’re using a 3 channel RGB EXR of a light source.

We need to change the ‘Extension’ of the image, which is set in the third menu down. Set this to Clip.

So far we can’t actually see our lights output. To remedy this we’re going to need to do some texture mapping. Add in a Mapping node and a Geometry node.

Connect the Parametric output of the Geometry node into the Vector input of the Mapping node. 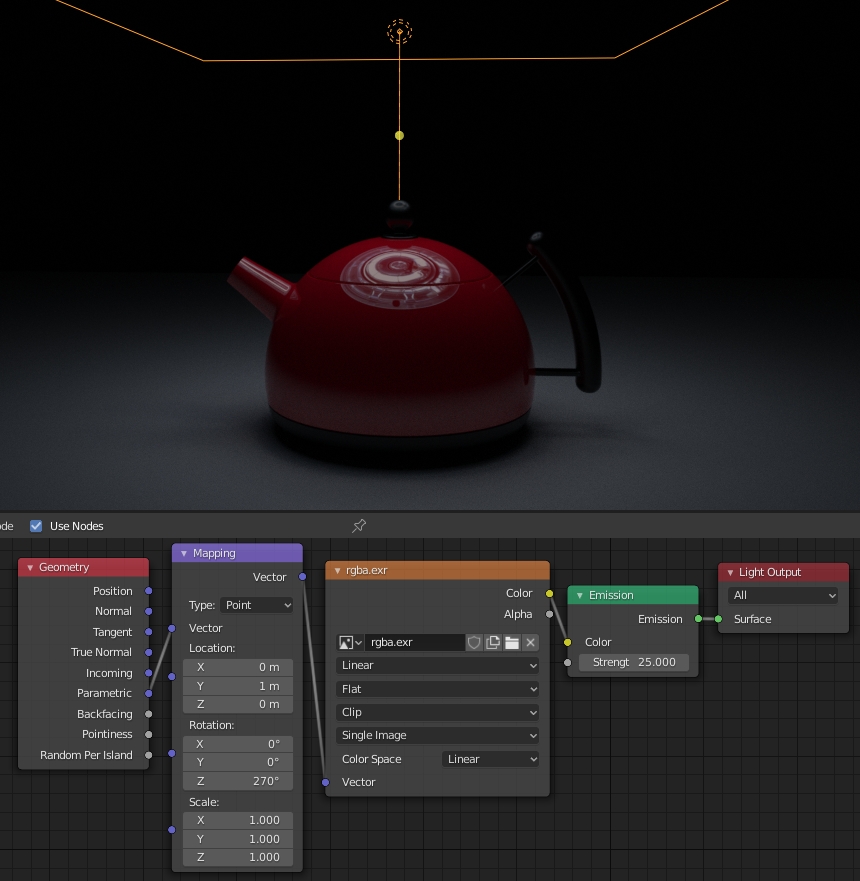 So that’s how to create a textured Blender area light using a three channel input image, nice and simple!

In the image below we have duplicated the area light and moved it. You can see how these area lights are actually adding their brightness when seen in reflections, they appear translucent. So you would be able to see through them to the environment for example, or in this case, through to another area light. This isn't a problem as such, for many situations this is fine. However to be more correct a light should be solid, and use an alpha for the transparent areas. This way, the closest light would obscure the other. We show a method to do this later. 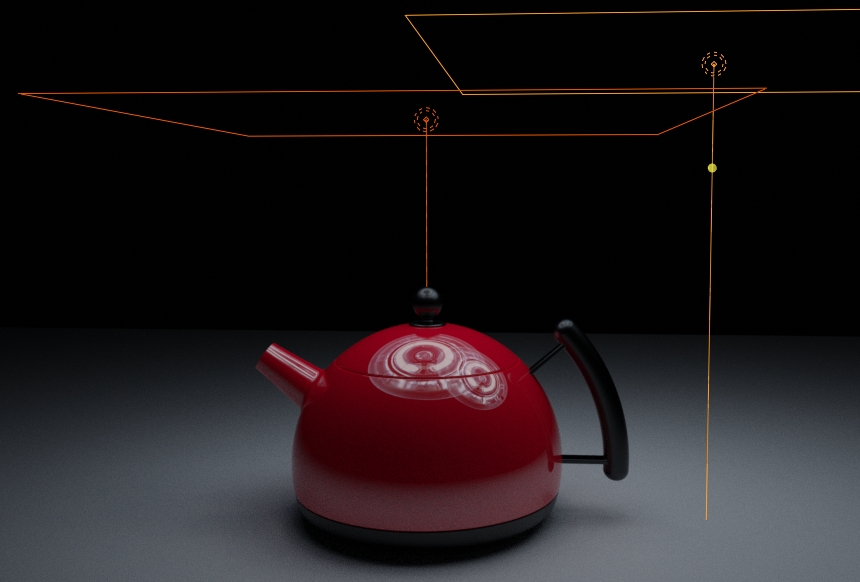 See how both lights are actually translucent

This time our starting point is a mesh plane, so add one to your scene and position it where you want. 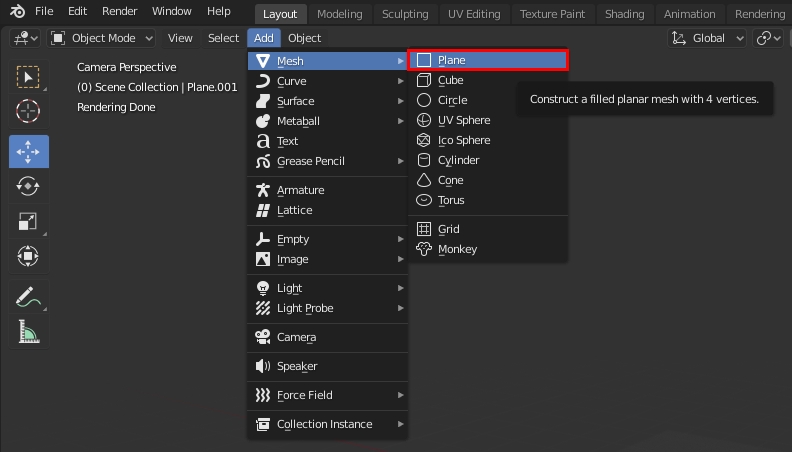 Now go to the materials tab on the ‘Properties’ editor for the Plane and click ‘+ New’. 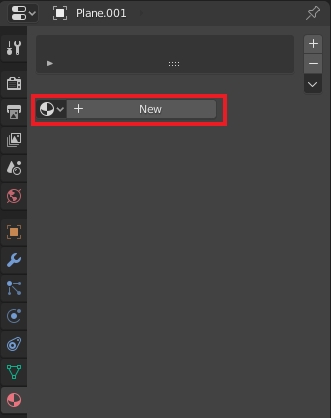 Add new material to apply to your mesh plane

If you toggle to the ‘Shader Editor’ you will see a Principled BSDF node connected to a material output node. 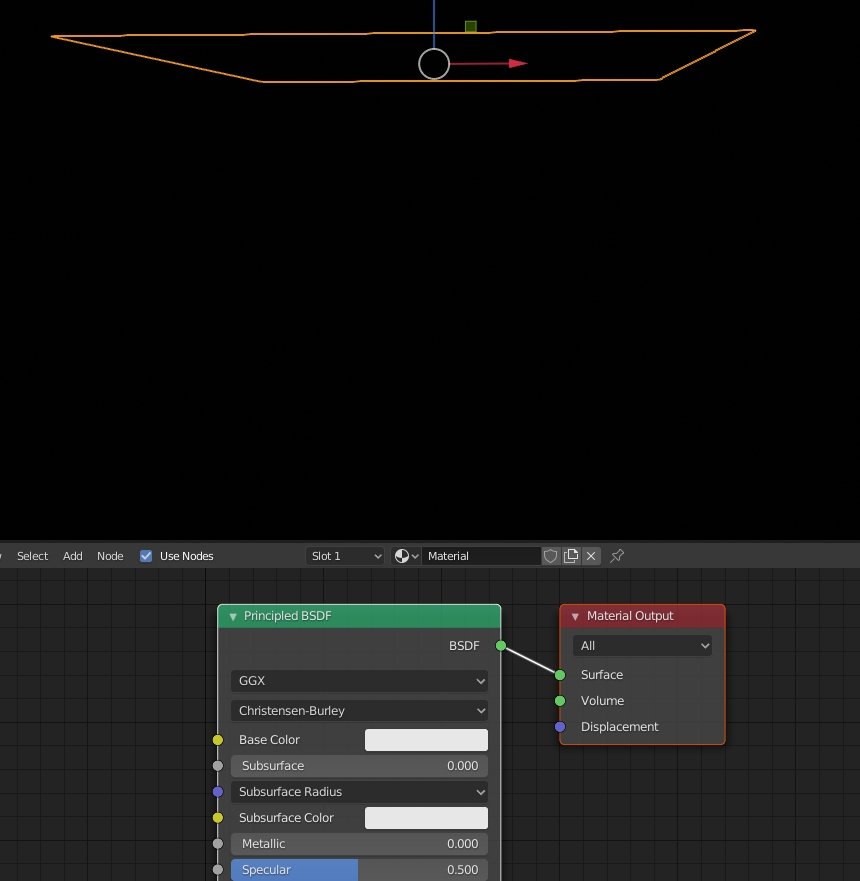 Default node network for a material, it is not emitting light

We are going to get rid of the Principled BSDF node, leaving just our material output node. Your mesh will now be completely black.

The Blender area light we made previously had an Emission node by default, for the mesh we’ll need to add one and connect it up to the ‘Surface’ input of our Material Output node. 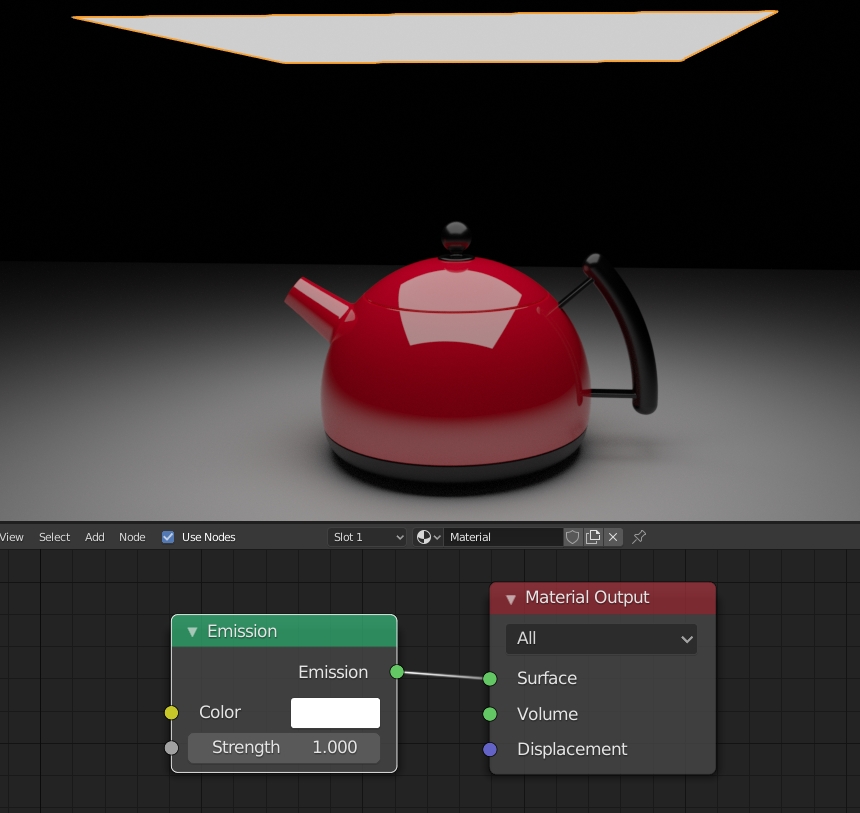 But if we move the light, we can see the plane is actually emitting white light on both sides. 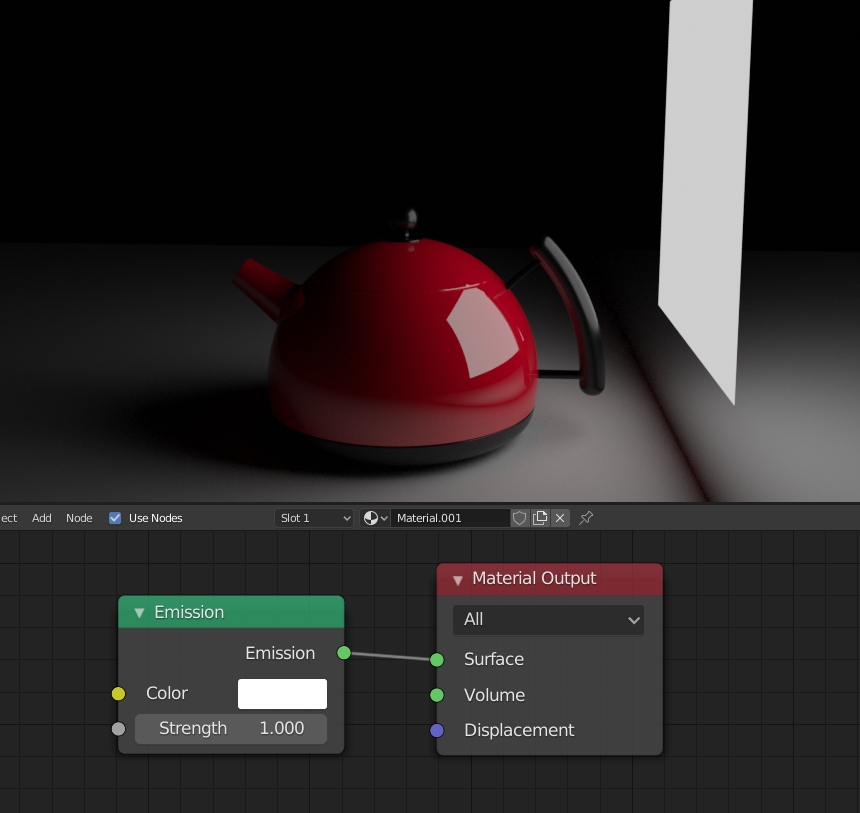 We want a single sided light, so we’re going to add in a Geometry node and a Mix Shader node.

Disconnect the Emission node from the Material Output node.

Connect the Emission the bottom ‘Shader’ input on the Mix Shader node.

Connect the ‘Backfacing’ output of the Geometry node to the ‘Fac’ input of the Mix Shader.

Link the Mix Shader’s output to the ‘Surface’ input of the Material Output. 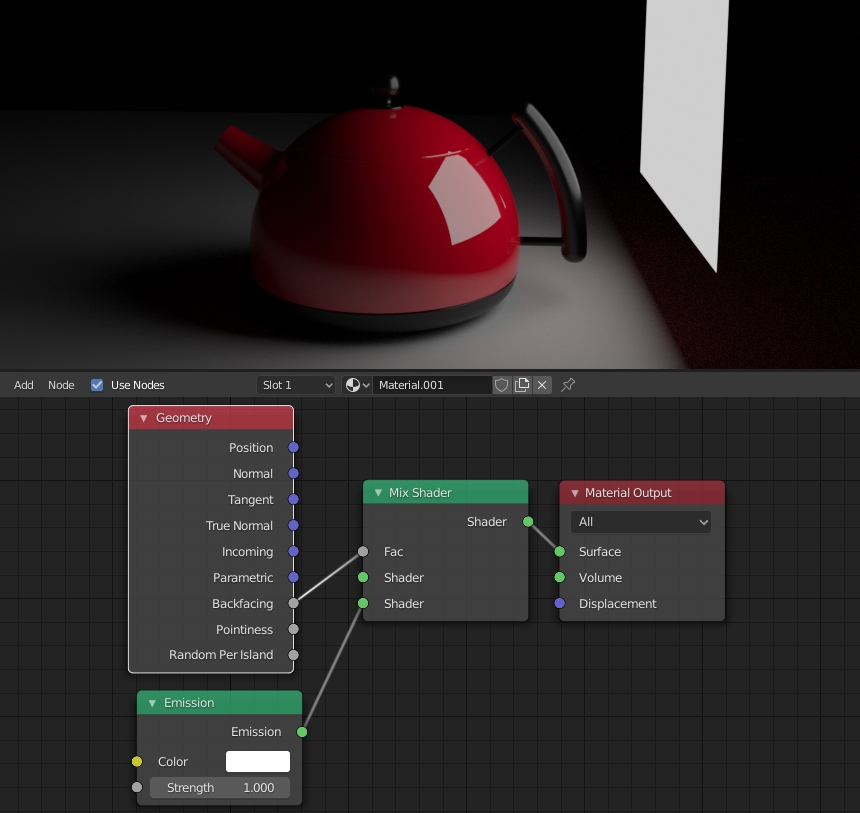 We now have a single sided emitter. Now it’s time to add the texture.

Add an Image Texture node, set extension to Clip and use the file selector to choose an image file.

If we connect the Color output of the Image Texture node straight into the Emission node, then our light will look like this. (Note: We added a grey environment so we can see that the light is not actually transparent) 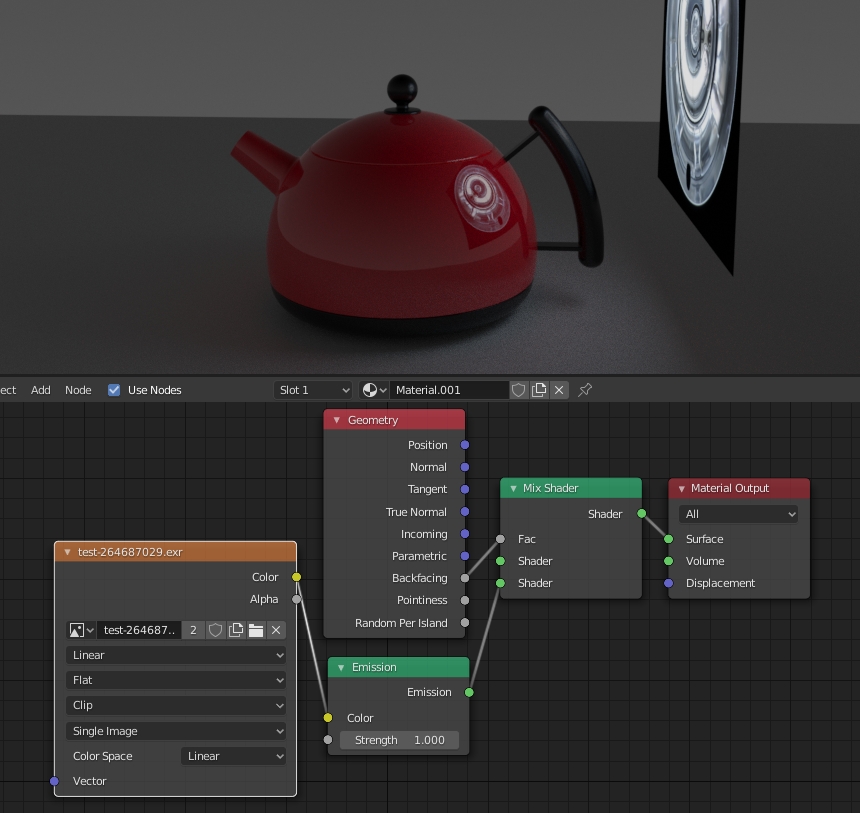 We want the light to appear transparent so we dont see the black parts of the light texture in the reflections.

Add a Transparent BSDF node and an Add Shader node.

Connect the output of the Transparent BSDF node into one of the Add Shader 'Shader' inputs.

Connect the output of the Emission node into the other Add Shader 'Shader' input.

Connect the Shader output from the Add Shader, into the Mix shader.

The light in your scene will look something like this. You can adjust the brightness of the lights by altering the strength of the Emission node. It looks the same as the previous Area Light with an RGB texture, but you can see the light in the camera view. 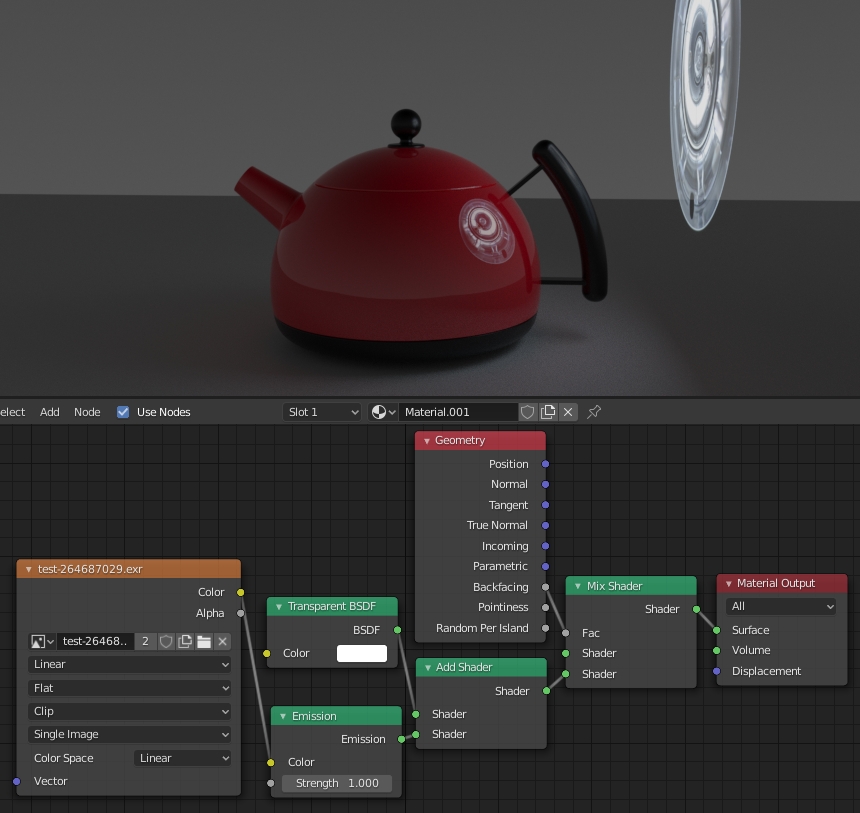 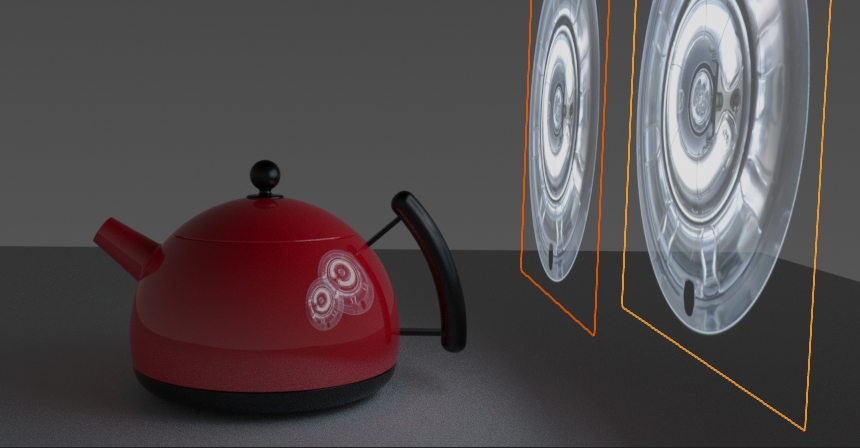 We show here the seperated RGB and Alpha, but it is a single image with 4 channels that we are going to use for this example. This is not a HDR image actually, but we will treat it as such and swap it for an actual HDR light source image later. This image makes it easy to see what is happening with the 4 channels on our light. 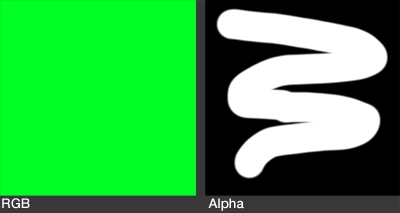 We have set up the network very similar to before when we created a mesh emitter using an RGB image. But we have piped the alpha from the RGBA image into a Transparent BSDF. However you can see most of the light is solid, with the squiggle in the middel actually translucent showing through to the floor. 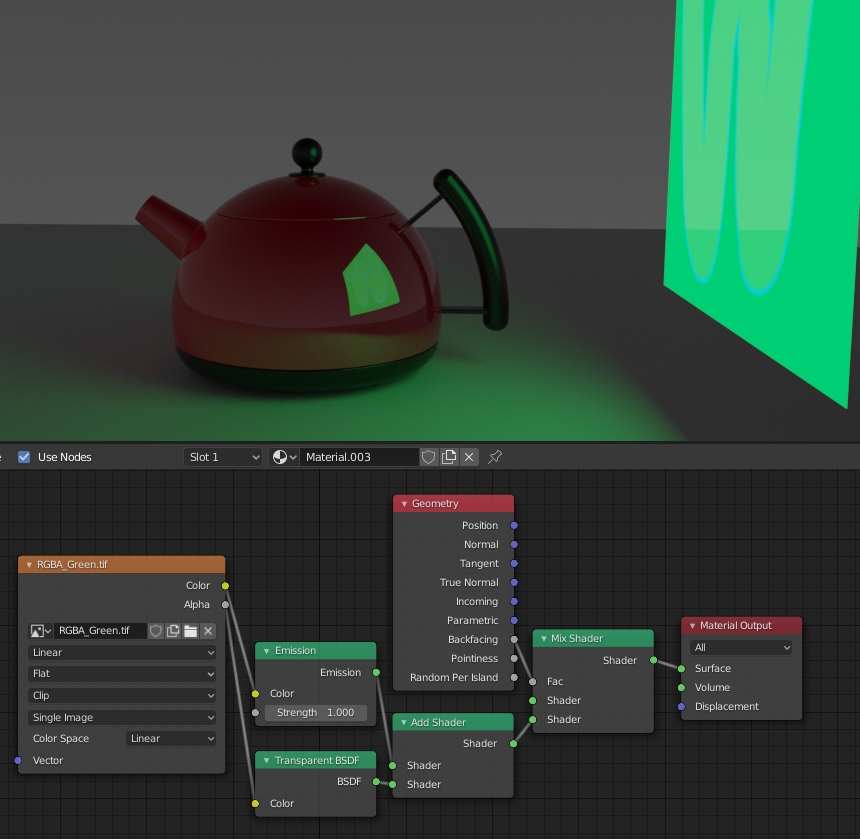 We are going to fix this by adding an Invert node between the Alpha from the texture, and the Transparent BSDF. Now you can see through the outside area and the squiggle is not transparent. 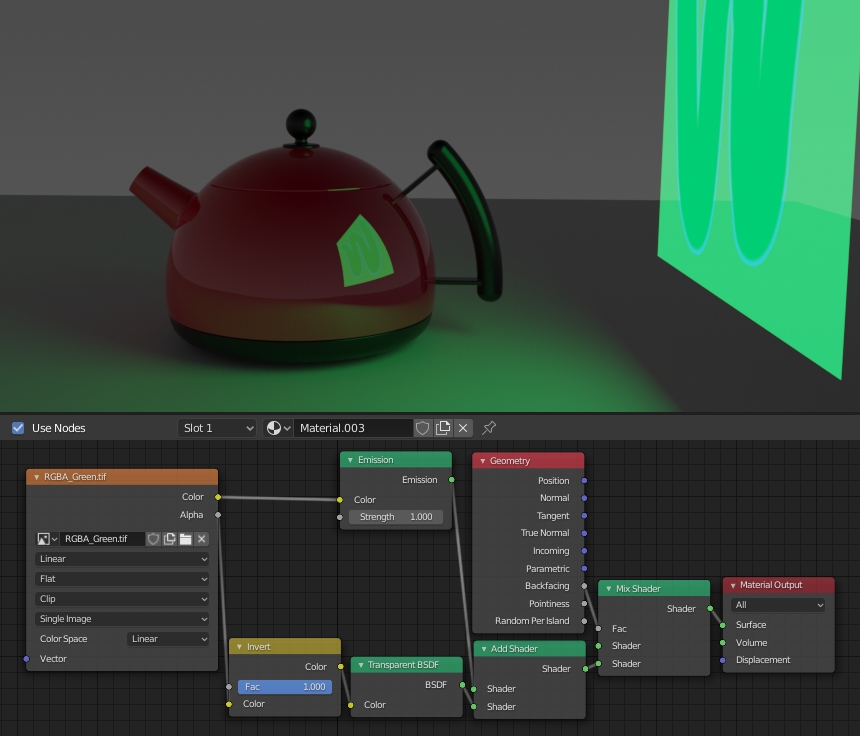 To do this we need to make a somewhat complex addition to the network. Pan away from your existing network and create the network below using the nodes shown.

This network will take the Color and Alpha output from the texture, and will multiply the alpha values into the RGB values and combine this back into image data to use for the emission.

Note, the nodes called Multiply are actually Math nodes, when you change their setting to Mulitply, their top bar is then named Multiply. Don't go searching for Multiply nodes. 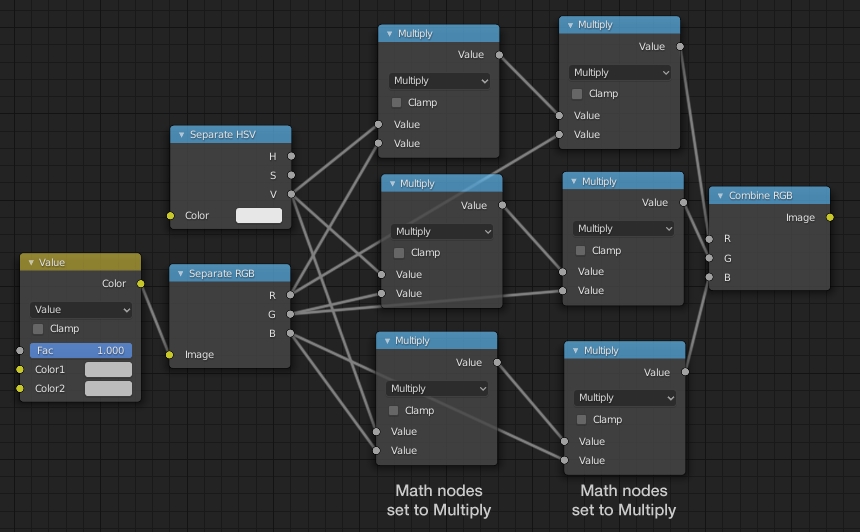 Nodes to multiply the Alpha into the RGB

In the image below we have moved the new network near to the original network, preparing to plumb it in. 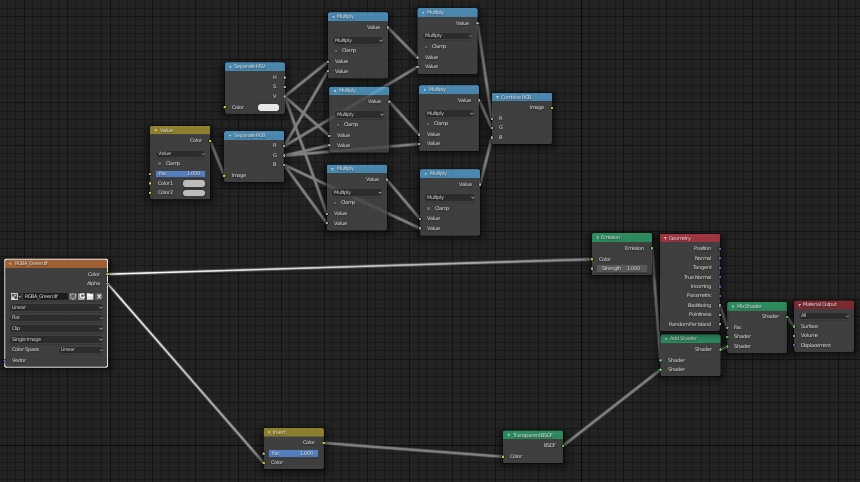 Getting ready to plumb in the extra nodes

The image below highlights in red the connections we made to add these networks together.

Red lines show how we added the 2 networks together

Below we can see the result. A bright green squiggle emitting light from the mesh. With the alpha part of the image making the rest of the surface totaly invisible. 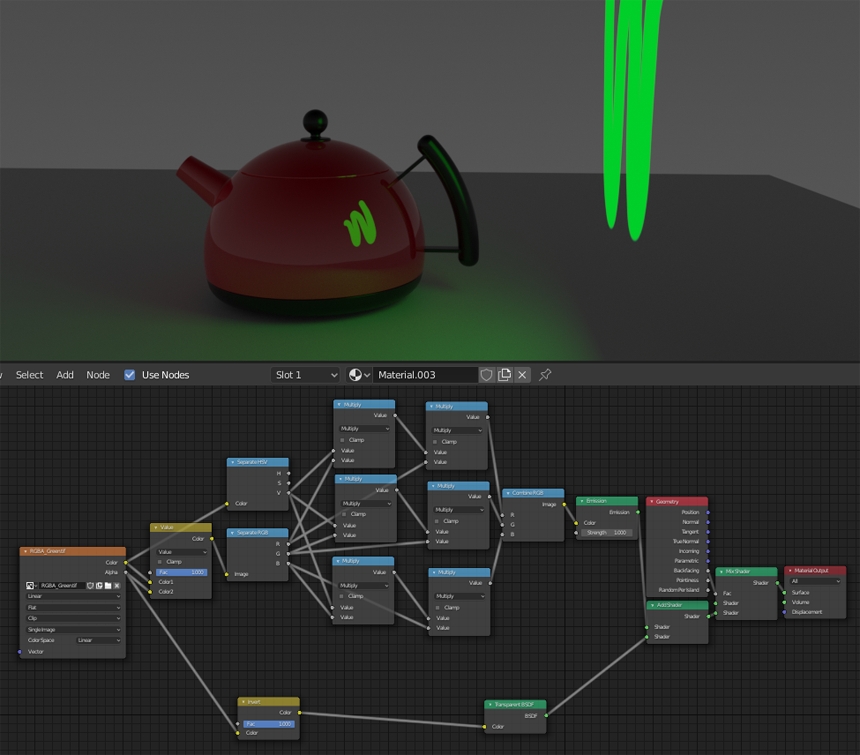 The final network producing the result we wanted

Now let's swap the texture for the final RGBA EXR file of a light source. Plus let's duplicate the mesh light and move it to see if the lights are solid and obscuring each other correctly. 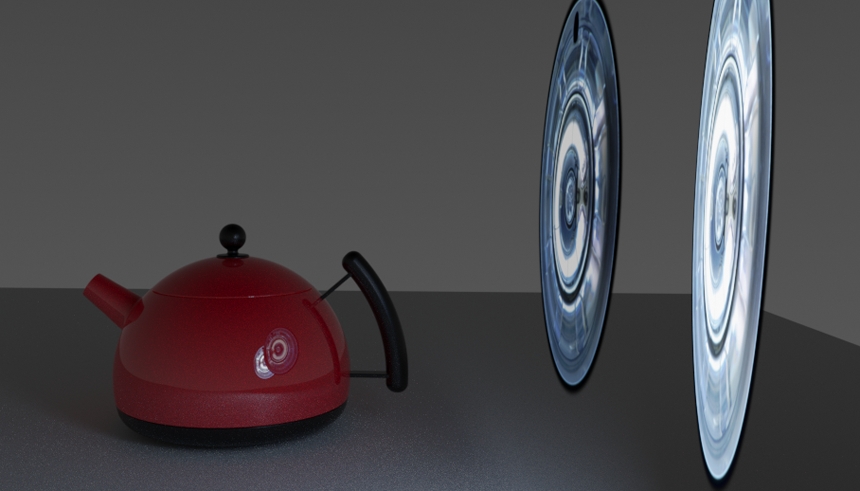 So that's the end of the tutorial showing different ways to set up area style lights in Blender using HDR textures.

The HDR Light Studio add-on for Blender builds area lights and a shader network for your chosen renderer (Cycles, Eevee, Octane and Renderman) in an instant - saving lots of time and clicks. HDR Light Studio also allows you to create and edit HDRI maps live with Blender too. Using a combination of HDRI map for the environment lighting and HDR textured area lights in 3D - you can perfectly make Blender HDRI lighting with realistic reflections coming from high-quality HDR images.

This entry was posted in Lighting Demos, Tutorials and Tips and tagged 3D Software: Blender.