It’s been very busy down in the depths of Lightmap’s Labs, and we cannot contain our excitement at the tech coming to HDR Light Studio any more so are going to have to give you a sneak-peek of what’s coming very, very soon!

Mac and Linux is here!
You have been asking for it, and we have been listening! A huge amount of effort has gone into porting HDR Light Studio over to Mac and Linux over the last few months, and in the process we have been tweaking things here and there to give you an even better experience designing and augmenting your HDR’s. It’s faster, sleeker, and busting with new features such as SunShade Nodes, LightPaint technology, Light Node previews, and much, much more. Here’s a screenshot of the enhanced UI to get your juices flowing and we’ll go on to explain a bit more about some of the new tech here and in later posts. 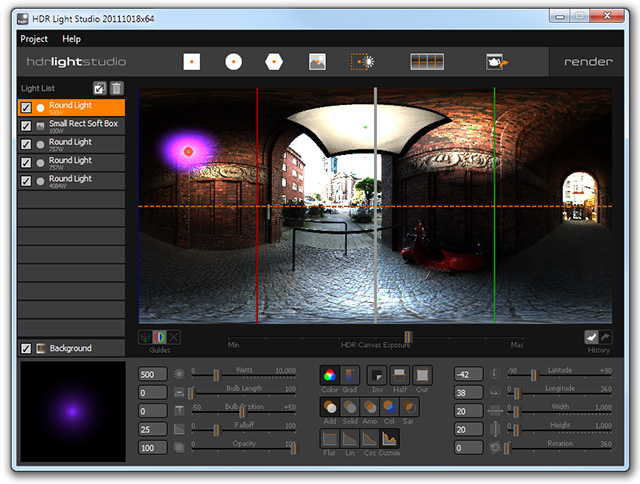 SunShade Node
As the name suggests, this new node enables the precision control of very bright light sources on existing HDR’s. Sources such as the Sun (or any bright area in general) can impact the quality of your renders in unfavorable ways, such as by producing speckling artifacts or overly bright illumination from certain angles. The SunShade Node allows you to tackle these problems head-on and control these undesirable effects with a powerful and yet intuitive control system. It also provides total creative control to ‘dial down’ the brightness of any light source in an existing HDRI. Here’s a movie we had on show at CVMP 2011 (more on that later) showing it in action:

LightPaint Tech
Lightmap’s new LightPaint tech is one of our favorites. It allows user interaction from within LiveLight (or any LightPaint enabled host) to pass back into HDR Light Studio to control Light Node placement, giving the user ultimate control over their effect on the final render. This exact positioning of reflections and illumination by clicking on the 3D model in LiveLight really helps boost productivity and getting the right result in those tricky-to-light areas.

CVMP2011
In November 2011 Lightmap attended ‘CVMP 2011’, meeting 3D artists and TD’s from the VFX community. We treated them to a sneak peak at these new tech features behind closed doors as well as talking about image based lighting, HDR augmentation, and our plans to bring HDR Light Studio to Linux and Mac.

We thought we’d share with you now this short video that we had playing in our display area to form a basic introduction to the core concepts of our technology and its application for VFX lighting projects using image based lighting.

We hope you are as excited as we are about these new technologies coming to HDR Light Studio, and in the next few weeks we will be expanding on these features in the blog in the run up to its public release.