Don’t get caught out by subtle changes between KeyShot 2 and KeyShot 3 when using the HDR Light Studio plug-in, or in fact any HDRI map.

You’ll notice that the Environment settings tab now has a ‘Contrast’ setting which has replaced the old Gamma slider found in KeyShot v2. If you create a new scene in KeyShot 3 this Contrast setting is set to 2.5. I changed this back to 1 straight away to ensure the HDRI lighting information was going to be used accurately, without any contrast adjustments being made which would alter the relative brightness of each light. But I quickly found out that my lighting was just not working as expected and looked terrible. It turns out the setting of 2.5 was in fact correct and is the equivalent to the old environment gamma setting of 1. 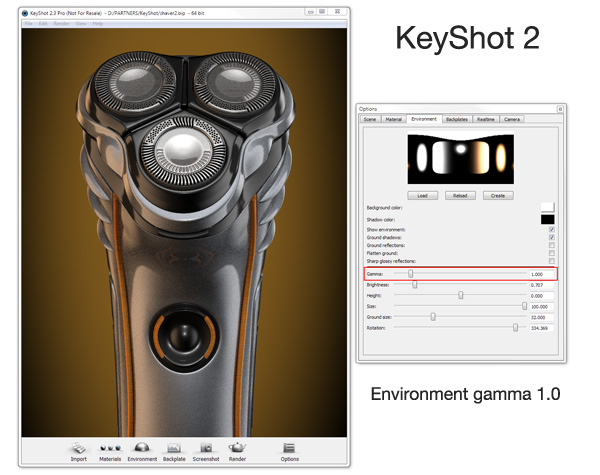 I found this out by opening the scene above created in KeyShot 2, which has an environment gamma setting of 1.0. This is the correct setting to use when using HDR Light Studio with KeyShot 2. 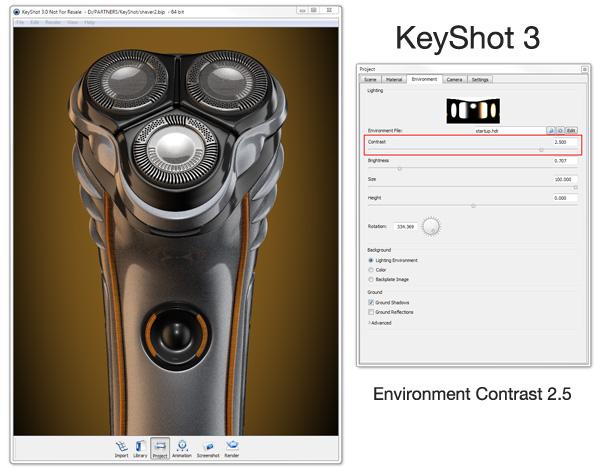 I then opened the same file in KeyShot v3 and in here the Contrast is set to 2.5 and real-time renders looked exactly the same. So I now know that the correct setting for the Contrast when using HDR Light Studio is 2.5. But I wanted to understand how this Contrast value relates to the old Gamma setting… where does this number come from and what does it mean?

I tried a range of environment gamma settings in KeyShot 2, and then opened these files in KeyShot 3 – to find a pattern. It turns out that in KeyShot 3 the Contrast value = 3.5 minus the old gamma value. So for example: 3.5 – 1 = 2.5.

I hope this little sum will save you some time when setting up KeyShot 3 scenes. Simple small changes like this can really trip you up and cause quite a lot of head scratching when changing over. It’s not a problem when opening up KeyShot version 2 scenes… this conversion is done for you. But when starting a new project – simply leave this Constrast setting at 2.5 when working with HDR Light Studio… and adjust the gamma of the final image in the image settings to get the look you want.

Additionally when you are not using HDR Light Studio but using HDRI content from 3rd parties, often for some bizarre reason, the HDRI gets a gamma of 2.2 applied to it to make it look nice. This leaves the image data useless for accurate lighting and reflections, as the real world brightness values have been altered. A light of 500w is no longer half the brightness of a 1000W light when you apply a gamma adjustment like this to a HDRI. To correct this and make the lighting information valid again, you would normally apply a 1/2.2 = 0.4545 gamma setting – the inverse of 2.2. So in KeyShot 3 to apply a gamma of 0.4545 you would need to set the environment Contrast value to 3.5 – 0.4545 = 3.0455… in this case I would say a Contrast setting of 3 would be near enough and happens to be the max limit on the slider also.

This entry was posted in Lighting Demos, Tutorials and Tips and tagged 3D Software: KeyShot.