At first glance, the Render View in HDR Light Studio can appear inferior to most modern renderers. First impressions can be deceptive. Let’s find out why the Render View is actually very smart and is making our users more productive than ever.

Tuned to the task in hand
First off, let’s remember the Render View is highly tuned to provide a fast and fluid interface for placing your lights and providing instant visual feedback on the lighting effect on the loaded scene. It’s not a final frame renderer!

Hogging the CPU
In HDR Light Studio 4, the Render View (LiveLight) behaved the same as other progressive ray-tracers. The rendering would start and collect more samples over time to improve the image quality/accuracy. But when the HDRI lighting is changed, the rendering would begin again from scratch using the new HDRI map. The end result: The renderer hogged the CPU and the render quality remained low for all lot of the time whilst lighting the shot. 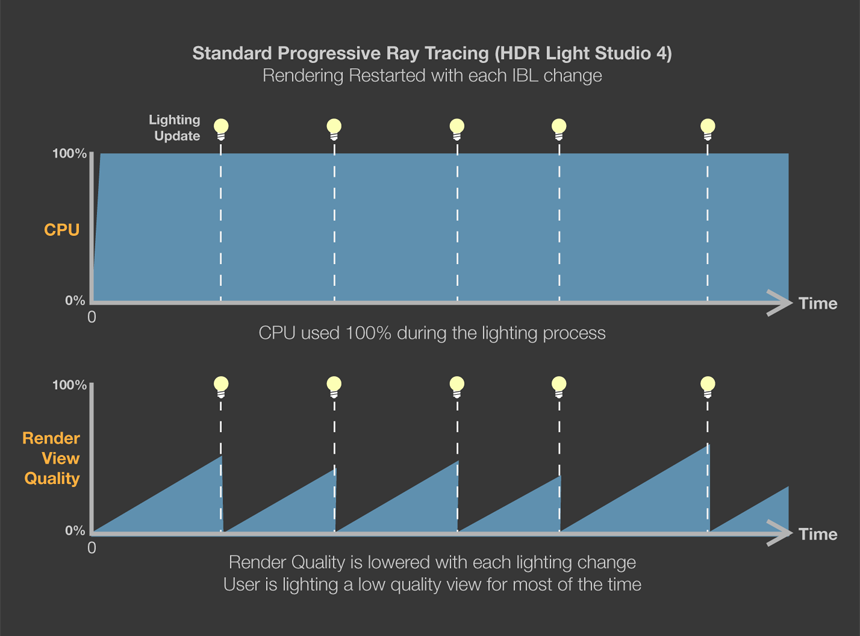 A Smarter Approach
In HDR Light Studio 5 the Render View is smarter. At a small sacrifice to its speed of collecting samples, once rendering begins, changes to the HDRI lighting do not require the renderer to re-start because the image based lighting is cached. Therefore once the Render View has reached the desired sample level it no longer hogs the CPU and you will always be lighting a high quality view. 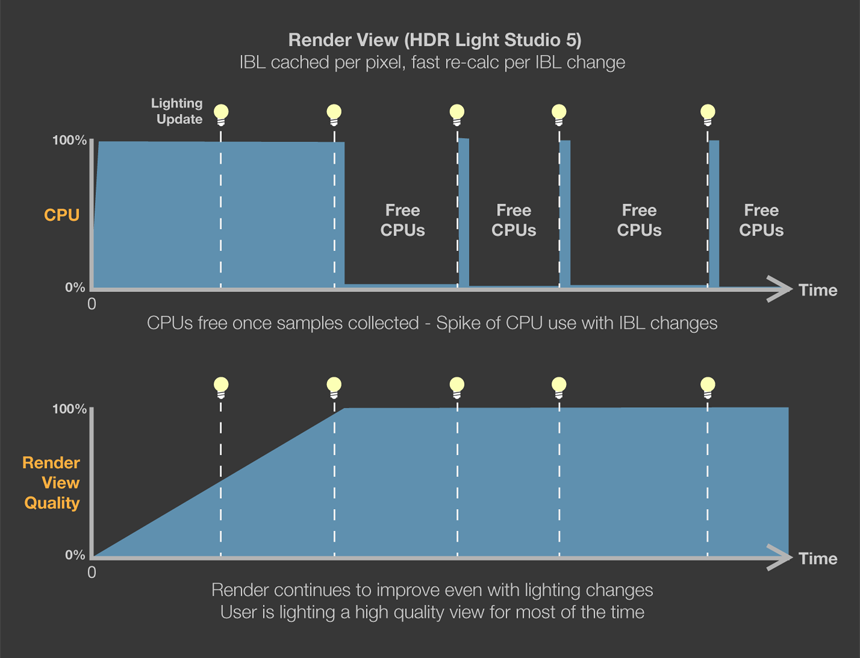 These advantages are less apparent with small simple scenes. But when a larger scene is being lit, it makes a really big difference.

The new Render View in HDR Light Studio 5 is good news for those using our Connections to 3D apps. The Render View can be used at the same time as your 3D apps interactive renderer without hogging the CPU resources. The end result is faster more responsive rendering in your main 3D software.

Additionally, HDR Light Studio 5 can be used on a very modest specification computer, with RAM being the only limiting factor in being able to load and light larger models. Because the render view is not invalidated with each lighting change, the longer the view collects samples, the higher quality render you are lighting. This makes HDR Light Studio responsive even on a 2 core computer.

No special graphics card or drivers are required as the Render View is CPU based only. So HDR Light Studio also plays very nicely with GPU renderers and is not competing for GPU resources.

This entry was posted in Lighting Demos, Tutorials and Tips.