Duncan Dix: CGI Behind the Scenes 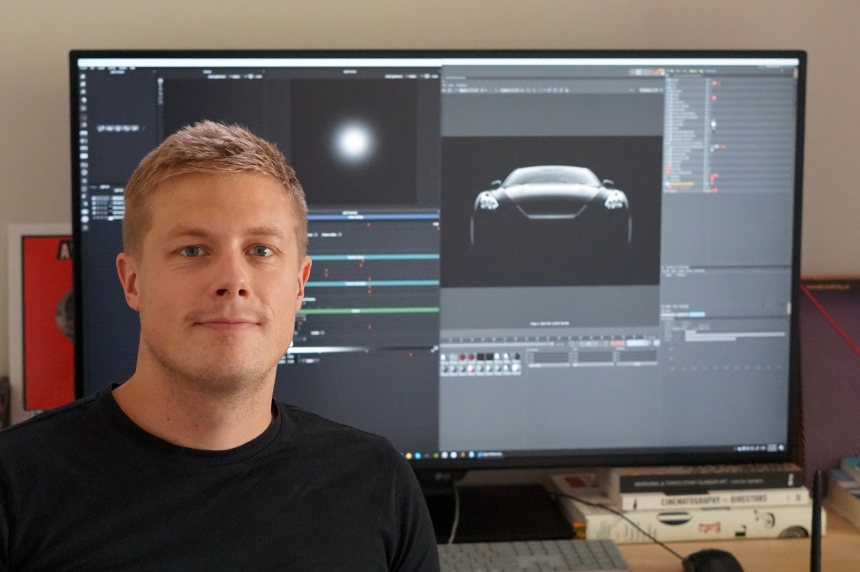 Duncan Dix guides us through the process of constructing CGI images as we look in detail at four of his automotive projects.

Growing up in Leeds here in the United Kingdom, Duncan Dix was interested in art, design and other creative projects from an early age: drawing, painting and building Airfix kits. Duncan studied at the University of the West of England in Bristol, graduating with a degree in Graphic Design. “It was during this course that I started focusing on Motion Design, which led to me getting into 3D to incorporate into projects. I played around with a number of applications before settling on Cinema 4D.”

After graduation Duncan’s first role was as a Motion Designer for Bristol based agency BDH, during which time he worked on the BBC’s award-winning natural history programme Blue Planet. After a stint as a freelancer in Sydney, Duncan spent three years working in London moving between various studios, agencies and post-houses. “By this point 3D had become central to my work and I had started using different render engines including V-Ray and Arnold, later Octane and Redshift. I worked at Territory Studios for the majority of my time in London, using 3D to create UI for feature films.”

In 2016 Duncan returned to Sydney and began specialising in experience projects. His portfolio includes projections for the Sydney Opera House and content for auto shows around the world.

“My role has now moved into creative direction: overseeing projects, working with the design and animation teams. I’m responsible for the overall creative, from concept to delivery.”

Lighting the Sails for Sydney Opera House - 3D lit with the help of HDR Light Studio. 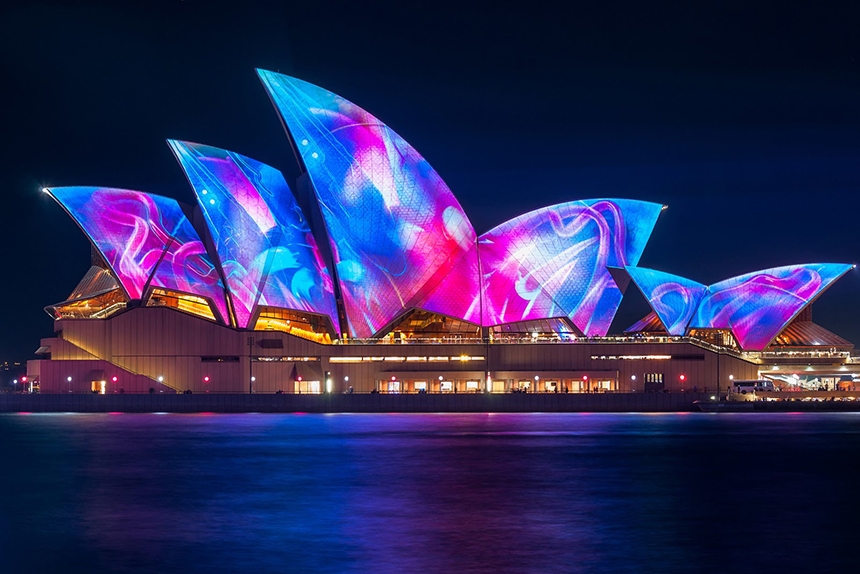 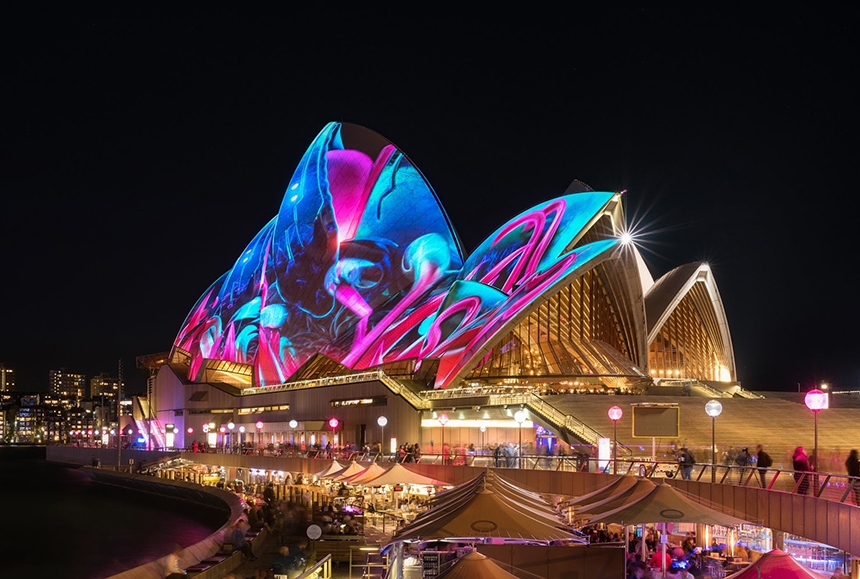 To see more photos from this project, click here.

“My 3D work focuses on lighting, texturing and composition but I think it’s a much broader range of artistic skills that make a great 3D artist, as well as an understanding of storytelling and visual narrative, photographic techniques, colour, composition and framing.”

HDR Light Studio is a key tool used in the projects Duncan undertakes which require a variety of lighting styles and lighting sources.

“Although my background is in motion design, I’ve always taken a lot of inspiration from 3D illustration and digital art for print. HDR Light Studio kept cropping up as a tool being used in these projects. Once I started using the software, I started questioning how I ever managed without it. It takes the guesswork out of lighting and gives you a comprehensive toolset for any situation. HDR Light Studio has a huge image library which covers my needs for lighting - from interior studios to natural exterior shots. The ability to solo a light source and tweak parameters is hugely powerful - knowing exactly what effect each light is having on the scene. The recent addition of the composite function is fantastic - being able to build up light groups and mask them.”

A focus of Duncan’s talent and experience is automotive design, which has led to numerous projects for Nissan and Audi. He relishes the challenge of this specialism:

“Many of the design projects I undertake can be very subjective. This is why automotive work is such an interesting challenge. There is a defined set of rules that must be adhered to. Each manufacturer has a different style of shooting - a specific lens, framing and lighting are used for different models, requiring you to dissect and recreate how images are constructed.”

“The obsession to detail that is required really pushes you as an artist, looking at the elements of a vehicle in the tiniest detail. From recreating a specific car paint, the correct layers, how it reacts to different lighting or how the flakes should look from an inch away”

“For most automotive projects, I will be provided with CAD data directly from the manufacturer so modelling isn’t required, mainly just clean-up and optimisation. I’m lucky as I’m usually working with a team that consists of artists who specialise in modelling, animation, particles, fluids - whatever it may be.”

“Having the same subject matter helps in improving as an artist. Creating a benchmark to constantly improve - analysing the success and failure of an image and pushing it in the next project. It is fairly easy to get any creative project to 90% - it is the last 10% that is really hard.” 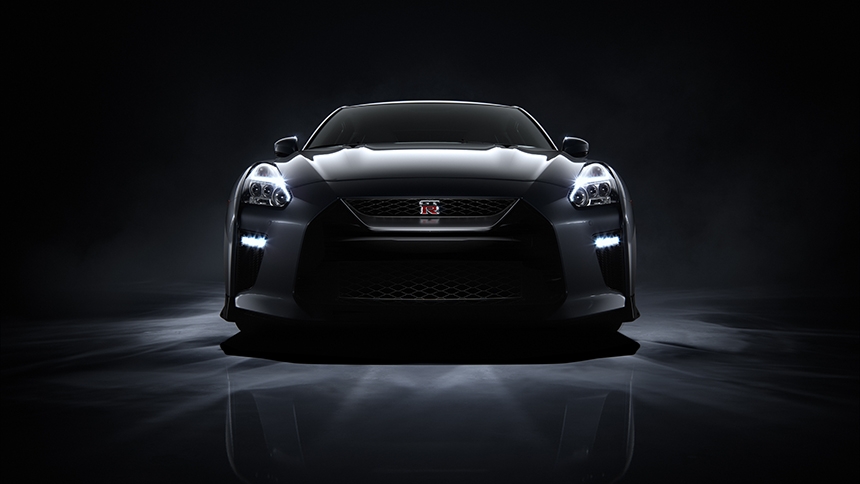 The images created for the Nissan GT-R were intended to reflect the reality of how the manufacturer would shoot the vehicle but push the images into a more stylised realm. Camera angles were chosen carefully: “A relatively tight lens and low shooting angle highlights the vehicle’s muscular styling and makes for a dynamic shot. The GT-R shots intentionally highlight the vehicle’s aggressive front styling and grill from which it earned its “Godzilla” moniker, whilst leaving just the lights visible from the rear.” 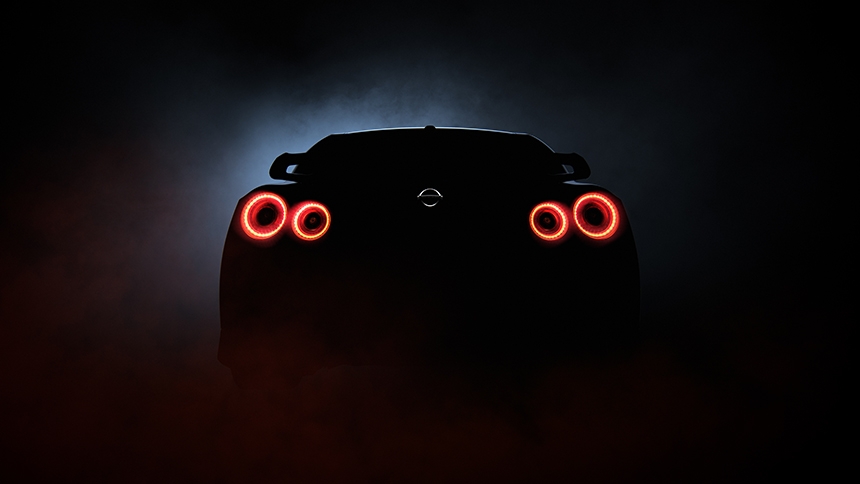 To complete his part of the project Duncan turned to his core pipeline of tools for automotive work: Cinema 4D, Redshift, HDR Light Studio and Substance for creating shaders.

“The first step of the project was to optimise and prepare the CAD data for shading. The time this process takes can vary hugely depending on how optimised the CAD has been delivered. The vehicle is then rigged with a custom build Xpresso setup, enabling the vehicle to be posed and animated if required.”

“Our next step was to complete the first pass of materials using a custom library of automotive shaders which are then tweaked to match the specific model. Depending on use, the vehicle is then optimised further by creating Redshift proxies for parts of the vehicle - wheels, interior etc.”

“I usually use synthetic softboxes as a base, getting the broad strokes of the lighting in, finding the lines of the car. I build a number of HDRIs to light a shot, using light linking to isolate areas of a vehicle. The GT-R images use separate HDRIs for the body, headlights, chrome and windows. I will build a shot up in this way, adding in detail, sometimes adding in photographic HDRIs to add some realism.”

In contrast to the stylised tone of the Nissan GT-R, the images created for the Nissan Kicks are restrained. Once more Duncan used synthetic softboxes to light the model, this time with an emphasis on realism. 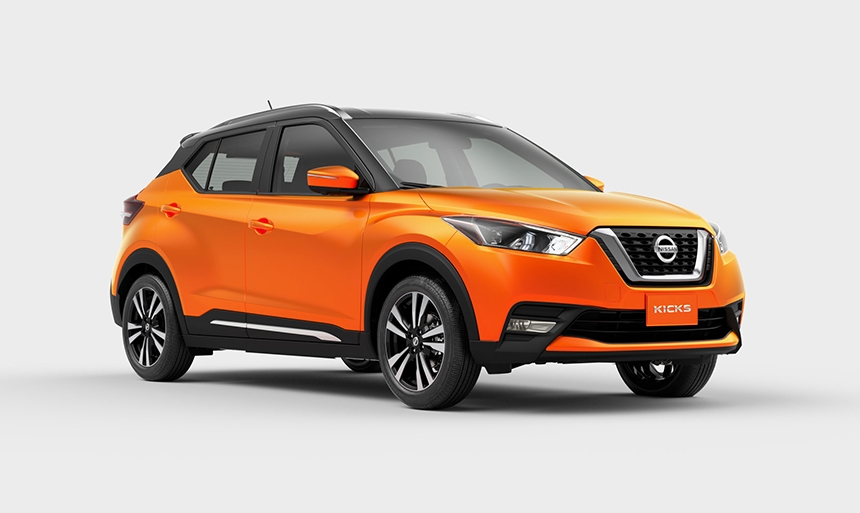 “The headlights here required a fair amount of work. They draw the eye in and a shot will fall apart quickly if attention is not paid to them. Curvature nodes were used to add detail into the LED running lights and I created additional HDRs to add detail to the interior reflectors.”

“I'm constantly cross-checking reference material when working to make sure I'm not pushing the lighting too far. The solo tools of HDR Light Studio are invaluable for this - adding and subtracting light instantly.”

“As with these Audi A3 images I often use area lights alongside HDRs - usually just as fill lights for interiors or to fake reflective caustics.” 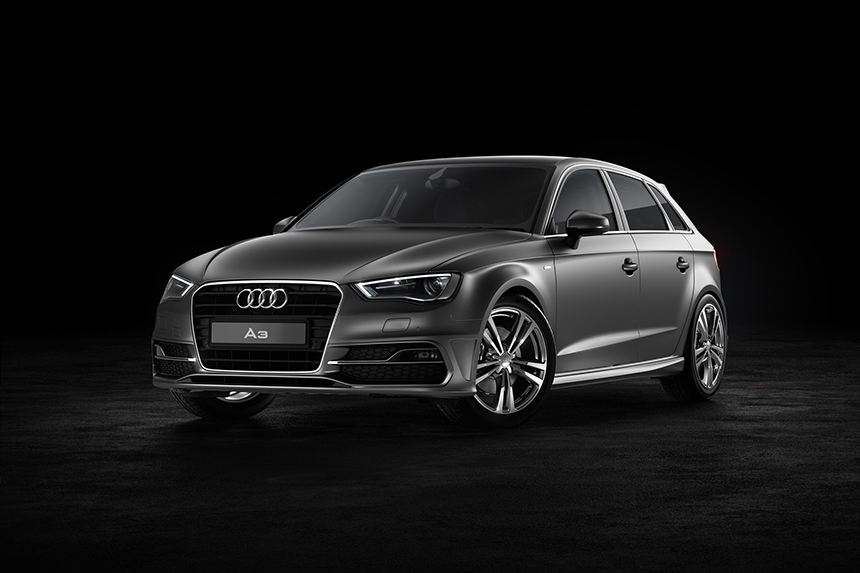 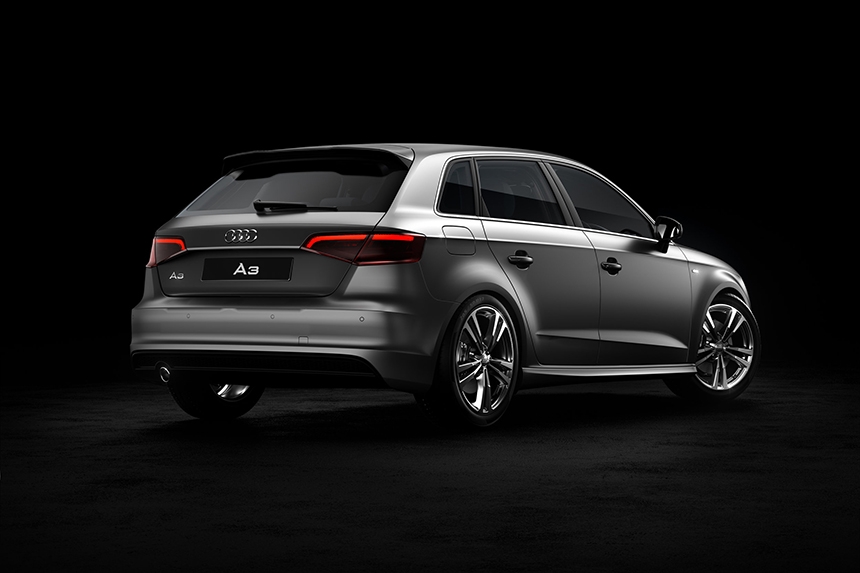 “In terms of lessons learnt since creating these images, the main one is very simple: Always create images with much larger crops (usually 1:1) than the final output, that can be cropped in and re-racked for numerous deliverables (16:9, 4:3 etc).”

The final project featured here is something different. At the 2019 Geneva Motor Show, Nissan launched designs for their concept vehicle Nissan IMQ. Duncan worked with Spinifex Group on this project, taking on the look development of the vehicle, which was then used for a number of assets throughout the launch. 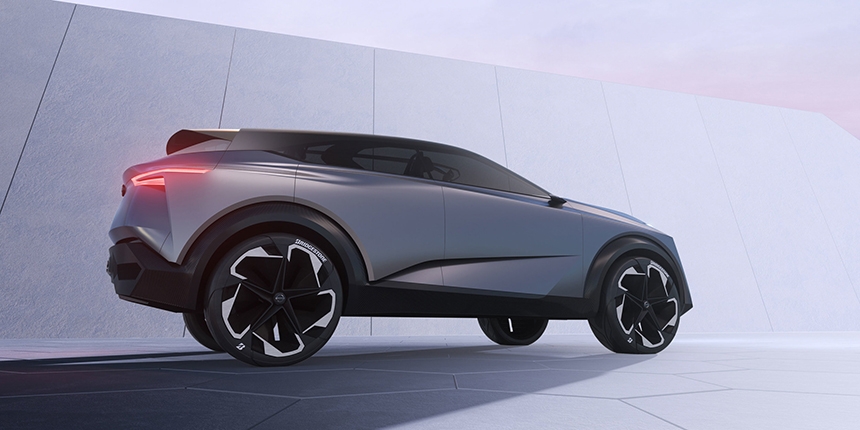 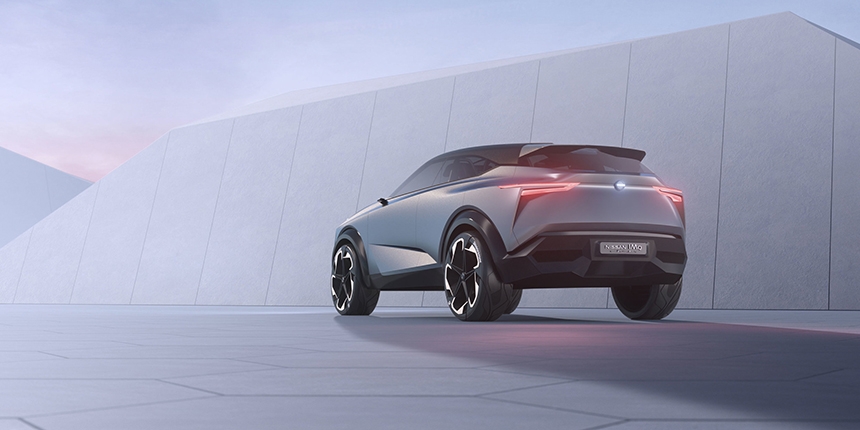 “Undertaking work for concept vehicles differs greatly as there is no real-world reference material. All look development and texturing must be done from reference renders provided by the vehicle design team.”

“As with all projects, I gather a large amount of reference material before starting work. Everything from shooting styles, composition, mood, lighting, texture details - usually around two to three hundred reference images for a set of shots. Behance is great for this. I use mood boards to collect references and The Automotive CGI facebook group is also a constant source of inspiration.”

“The futuristic/ethereal feeling of the IMQ was created by pushing the blue and pink tones in the images and using a slightly non-conventional shooting style.” 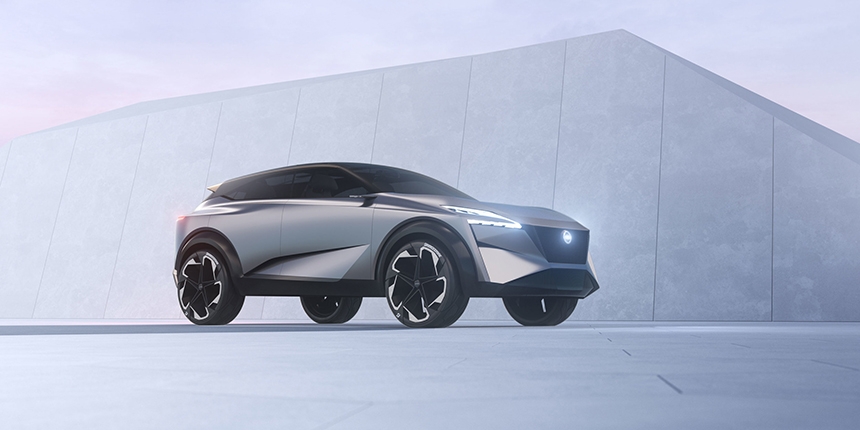 2020 looks set to prove a busy and productive year for Duncan who has just taken up a full-time position as Creative Director at the Spinifex Sydney studio. “We are continuing to work closely with Nissan and have been producing creative for the Ariya EV crossover concept - launched at The Tokyo Motor Show.“

For artists inspired by his work and with ambitions to follow a similar career trajectory, Duncan has strong advice:

“I think being able to work within a team gets you a long way as a 3D artist, being patient, expressing yourself clearly, understanding you are part of a larger vision. This enables you to pick up techniques another artist has spent a lifetime honing. Being reliable, calm and someone who can be trusted to get a job done will get you further than having the best edge flow in the building!”

“Mastering the technical side of using the software is just half the battle, being able to then create something unique and personal to yourself is what will really set you apart.”

Check out Duncan's Behance here to see more of his work.