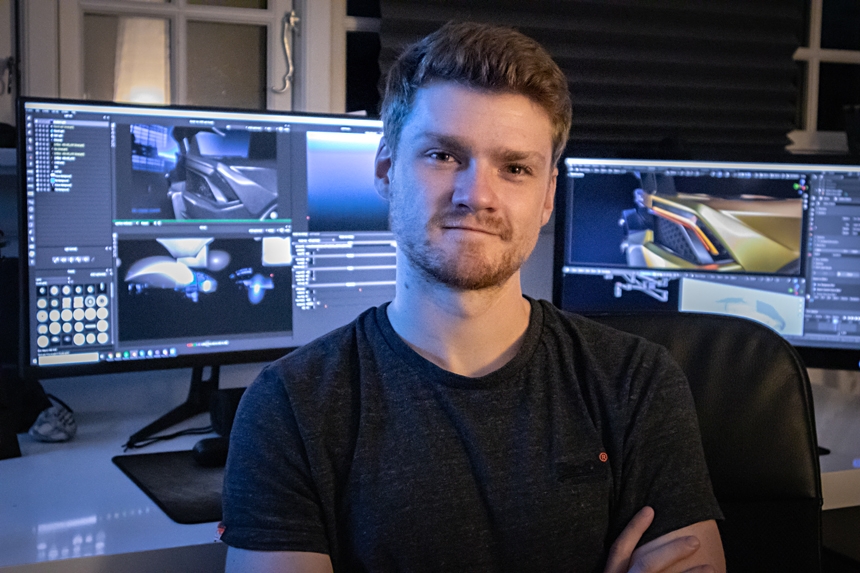 Daniel Vesterbaek in his home studio

It all started back in 2013 when Daniel Vesterbaek opened Blender’s 3D creation suite for the first time. Daniel was still in school and his interests then leaned towards filmmaking and design-related studies:

“I quickly fell in love with the software and wanted to create stunning images of cars, but it took me a long time to get close to my goal. I was studying at a technical/innovative college where I got to do a lot of visualisation of conceptual products, along with 3D design and 3D prints. The school did not teach 3D however, so I am self-taught. I spent all of my free time learning Blender.”

“Ever since I was a kid I always loved vehicles and was trying to draw them whenever I had a piece of paper in my hand. As I got more into 3D, I started seeing artworks that showed more than just nice-looking cars and that was the moment I realised what I really wanted to do. Instead of just making cars, I wanted to be a storyteller, so I started focussing on composition and filmmaking. Amaru Zeas is one of the artists who made me realise this. His work also involves cars, but has so much story packed into them.”

Following his graduation, Daniel set out to work as a freelance artist, but finding regular clients and managing a business by himself proved difficult:

“After a year I was contacted by an animation studio based in Germany and I spontaneously moved there and started my “real” 3D career. Since then I have been at two different studios in Denmark and have learned a lot from my colleagues and friends there. I am always curious to try out new things and get to know new 3D artists around the world. Everybody has their own flair and touch that they put into their work and this fascinates me. I try to learn as much as I can from everyone I meet.”

Daniel divides his talents between studio work and home projects. “In my studio job I mainly work with robotics companies and create animations for new product launches. At home, however, I mainly do automotive rendering as it is my passion.”

“I use Blender because of the awesome community and the speed at which the software is evolving. I originally chose it because it was free and I loved the open-source nature of it. However, even if it had - for instance - a $50 price tag, I would still have used it because it is comparable to paid 3D packages.”

“I think Blender is a super strong all-around tool. It is moving in the right direction and in some cases is already in front of the competitors. The best thing about the 2.8 release is how they have ironed out all the small things that made people give up on Blender after opening it for the first time - like making the shortcuts and buttons more mainstream, and updating the layout and design to be much more user friendly and sleek.”

“At home Blender is my main tool, but at the studio we use Cinema 4D. I love both tools and use a mix for most of my work. Blender feels lighter and more open. It allows you to play and try out things, whereas Cinema 4D is more closed and limits you in a lot of ways. Cinema 4D has some cool tools that are not available in Blender without the use of add-ons, for example the MoGraph tools that are great for motion design projects. I also use Houdini which has a great procedural nature that Blender cannot yet compete with.”

Over the years Daniel has noticed a rise in the number of businesses, as well as individuals, turning to Blender: “It gives them a solid 3D package that is very profitable compared to others. On top of that, Blender is in constant development and because of its open-source nature it “moves quicker” than the old, big boys. It’s lightweight and super-quick. A lot of young, talented artists know this software ‘to the bone’.”

To render his images Daniel uses both Cycles and Eevee. “I prefer using Eevee for previewing and building the materials of a scene. However, I always render my final content using Cycles as that engine delivers more realistic results because it is physically correct.”

“I used to use the native lighting process in Blender, lighting the scene with sun lamps, area lamps and spot lamps and then creating nice reflections with mesh lights (emission planes). This process felt cumbersome and a lot of guesswork was involved. It is hard to get the reflections just like you want them, having to move meshes around in 3D space and trying to figure out how they will be reflected in the surfaces.”

Lightmap first made contact with Daniel after he won second place in the Hum3D Car Render Challenge 2019. Daniel was asked to join the Beta-testing group for HDR Light Studio’s Blender connection.

“I found HDR Light Studio a long time ago - but because a connection to Blender didn’t exist back then, I couldn’t use it for my projects. I joined the Blender Beta programme because I love the concept of HDR Light Studio and would love to see professional lighting software being adopted by the Blender community - I want to see more amazing automotive work done in Blender.”

“The plug-in makes it much easier and much more convenient to light cars in Blender, which is awesome. The thing I value most about it is the layer system, that allows me to quickly try out different lights. It makes it super easy to solo lights, which is an important thing to do while lighting vehicles or scenes in 3D. The light paint feature is also invaluable as it quickly places the lights in the exact places you need them to be in.”

Daniel believes that the plug-in will aid him to pursue his passion for automotive rendering. “I am still working full time at the studio, but I want to move to more of a freelancing role soon. I hope that HDR Light Studio will enable me to take on more projects - to quickly generate high-quality lighting for my product and automotive shots and animations.”

Daniel’s advice to other 3D artists looking to improve their Blender lighting skills is to do their homework:

“Study it! Spend time trying out different things and read books about it. Lighting is fundamental to art and filmmaking, so if you look at how old painters used lighting or how filmmakers do it today, you can learn what you need to do in order to create good lighting in 3D.”

“Prepare yourself to work and study a lot. If you only want to create cool effects you can make in an hour, you won’t get far as a 3D artist. Art requires a lot of work and I am still working on getting there. But you will discover that if you put the time and effort into it - and work hard - you will learn a lot and be able to create cool artworks and animation.”

“To be a successful 3D artist you need to have a very strong will to push yourself and get better every day. That, at least, is what I have experienced. Whenever I have started to settle and spend more time relaxing and just doing whatever I wanted to do in the moment, I could feel how I would stop developing my skills and stop creating the images and animations I wanted to make.”

“There are no magic buttons or quick and easy solutions. However, HDR Light Studio can help you on the way. Great tools are not making the work for you, but they sure are making it easier to get the work done.”

Thank you so much Daniel for taking part in our beta and being interviewed. Daniel has a rapidly growing Youtube channel where he shares his work and lots of Blender tips. Check out his youtube channel here.