We are delighted to announce that Lightmap has joined CG Boost as a sponsor of their 3D Art Challenges. A 1-year license of HDR Light Studio - Pro is being provided each month as a prize.

These Challenges attract a wide range of fantastic Blender 3D Artists and the quality of the entries look excellent. So we are looking forward to seeing what the winners can produce using HDR Light Studio with Blender in the future.

Interested and want to take part in the Challenge?

We will update this section with the winners each month. Newest first.

Congratulations to Diana Schulz for being one of the winners! 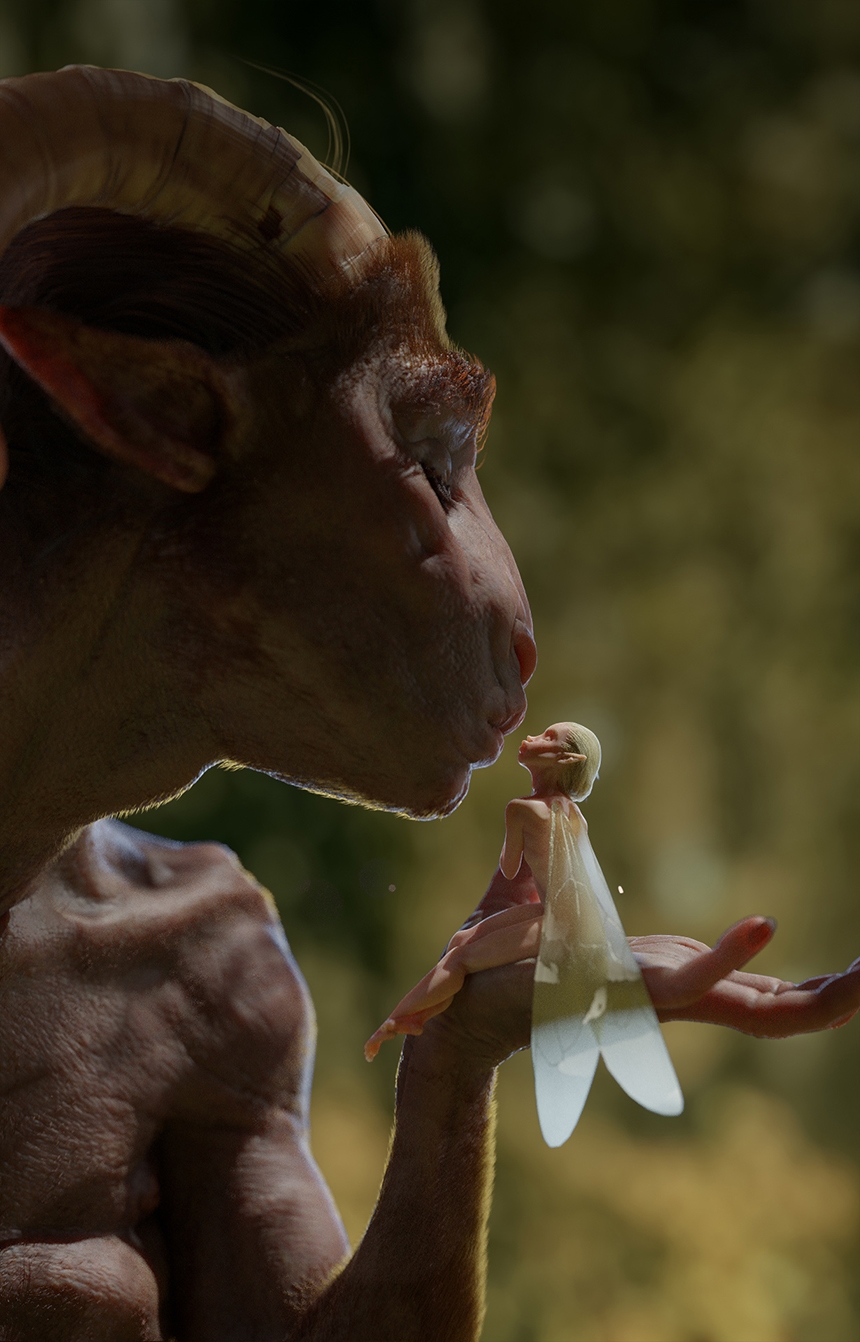 "The mythology is full of love between different mythical creatures and humans. So I choose a little scene with a Pan and a Fairy."

Congratulations to Clayton Sjoerdsma for winning the first place! 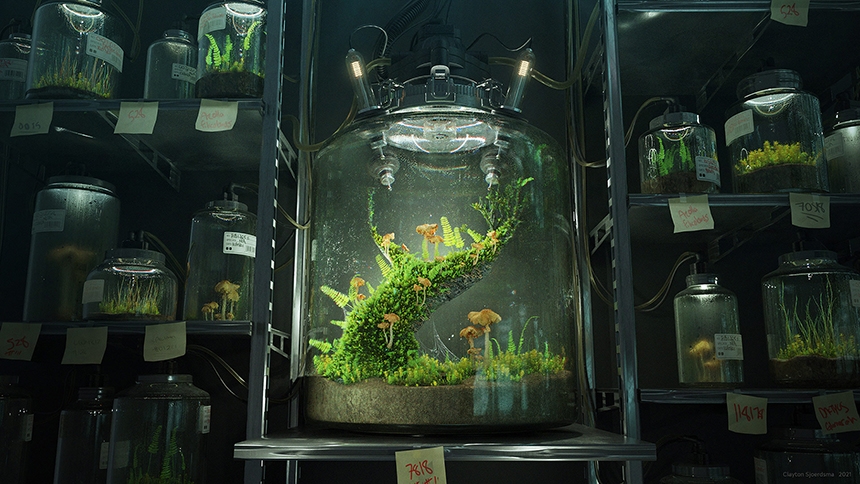 "As soon as I saw the theme for this challenge, I knew I wanted to be a part of it!

So for this render, I wanted to bring the viewer into a lab of multiple micro biomes contained in bottles. Each bottle being fed by a network of water lines and wires to power the UV lights. Each individual world is carefully monitored and documented to ensure that they flourish within their bottle.

As always I learned a lot, this was the first project that I dove into geometry nodes and I was very impressed with the results.

This project took me roughly 20 hours from the early concept stages to the final render. As always I used Blender for modelling and also for texturing, Cycles for rendering. And Photoshop for color editing and post-processing."

Congratulations to Cesar Verastegui for being one of the winners! 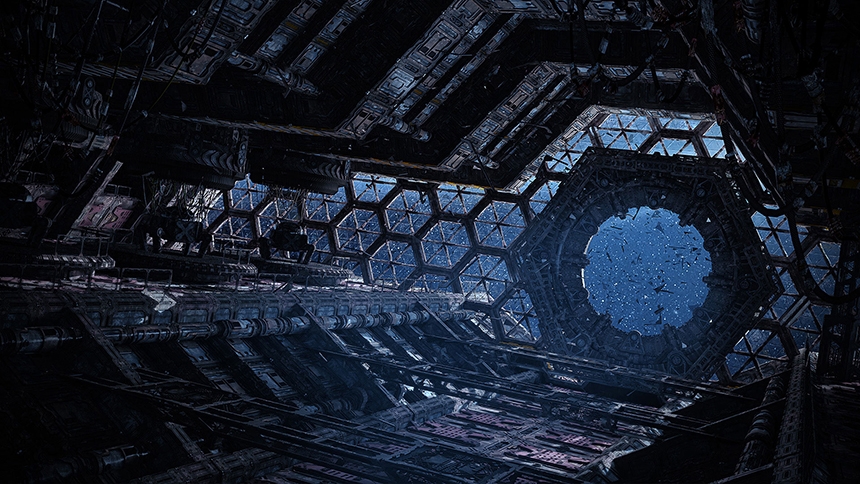 "I created several panels and cables that were the basis for the whole scene. A lot of geos, so I had to create several proxies to handle it."

Congratulations to Jan Klingner for being one of the winners! 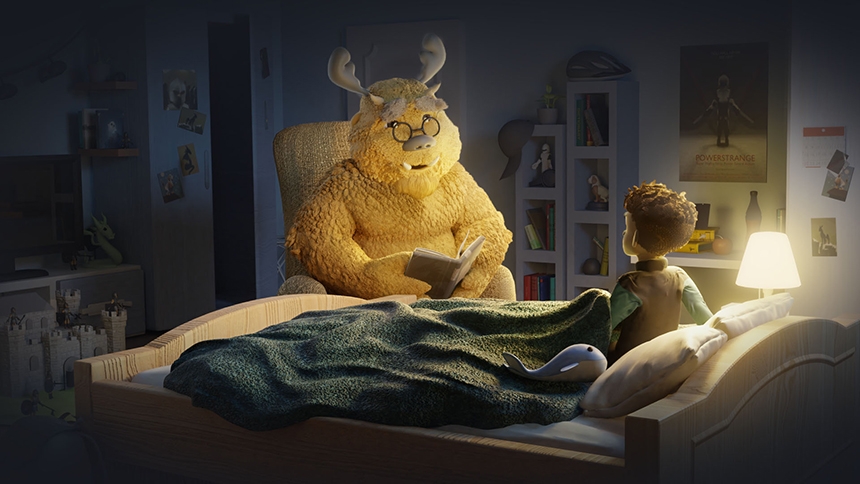 "Don’t worry! The soft deep voice says. Your sorrows will be gone tomorrow. Let’s take a nice book and find some sleep.

I had the idea, to twist the classic idea of a “scary monster in the closet” and to make it a friend of the child in the bed. Also, I wanted to give the little boy a bit of personality with a lot of toys and posters in his bedroom.
All the cards, posters and toys are modelled myself"

Congratulations to Marty Friedrich for being one of the winners! 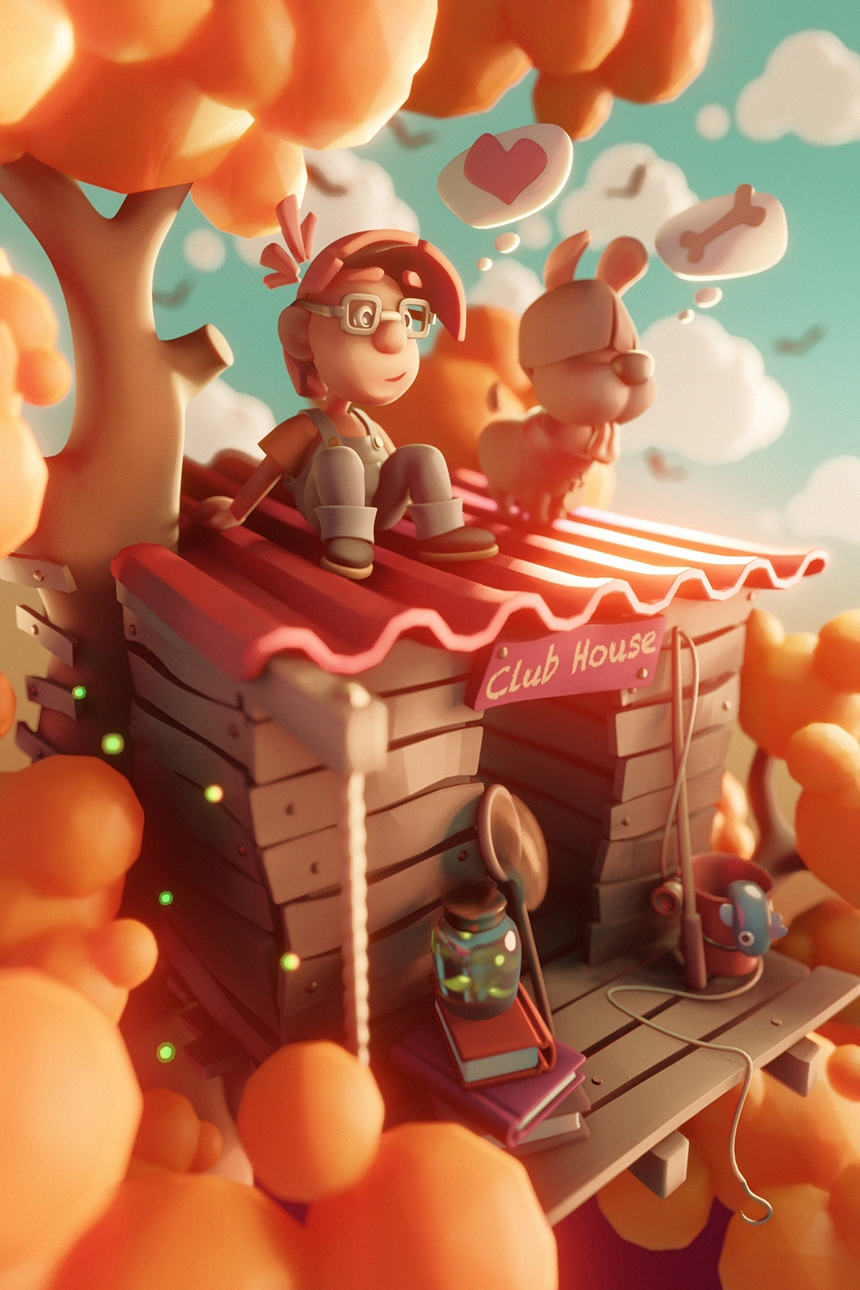 "Most of all, I associate a tree house with childhood, friendship and a feeling of freedom. I wanted to summarize these beautiful things in one picture. I hope I can give the viewer a feeling of warmth and security and awaken their memories of their own childhood.

That was the first project I did with Eevee. That’s why I learned a lot about this powerful rendering engine in the process.

The entire process took about eight hours to complete."

Congratulations to Eugen Demeterca for receiving an honorable mention! 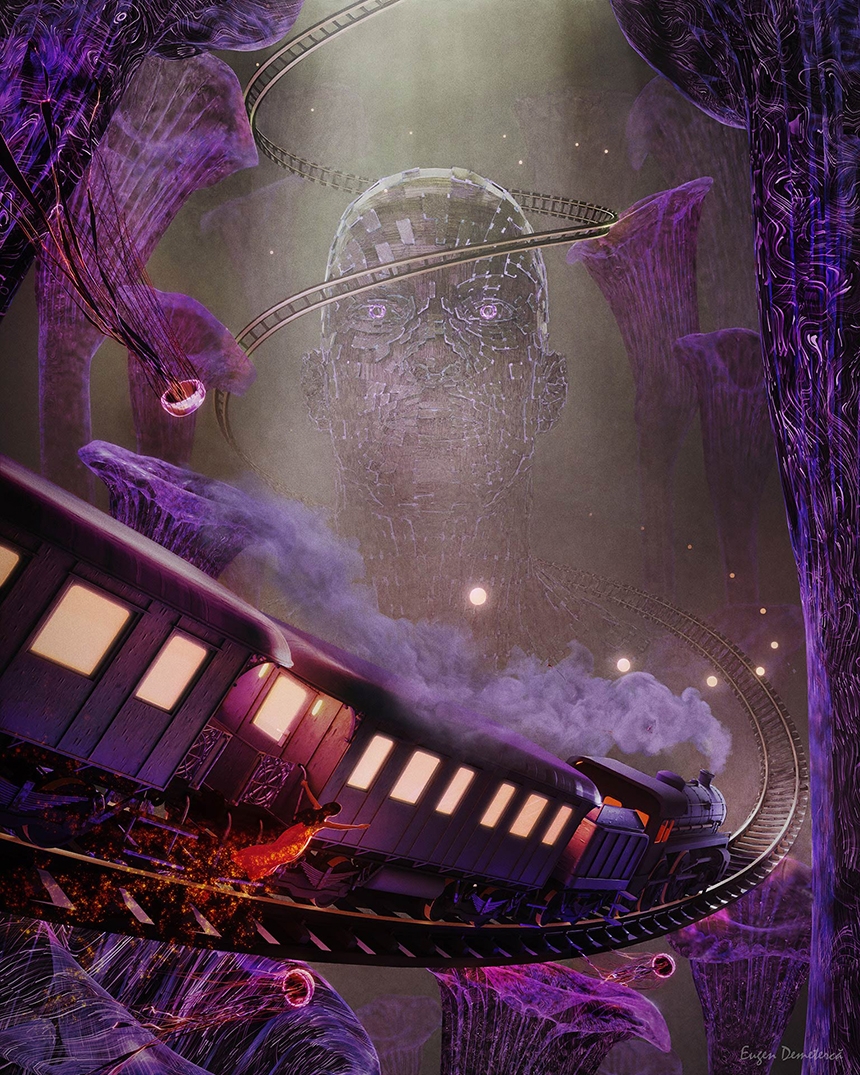 "My initial starting thought for this challenge was, 'can I do some thinking out of the box for the theme?' After that, the thought process went to 'can I use the train in a dreamlike environment?'.

And that I did, as you can see!

I worked on it for hours and hours (I didn’t count) almost every day when I came back from work, and I finished it just now.

The main things I learned in making this image was duplicating objects along a curve and how complicated it is to fit the straight wagons on a very curved rail.

The train looks all right from this point of view, isn’t it? Well, believe me when I tell you that you don’t want to see the other side!"

Congratulations to Giovanni Coakley for winning the first place! 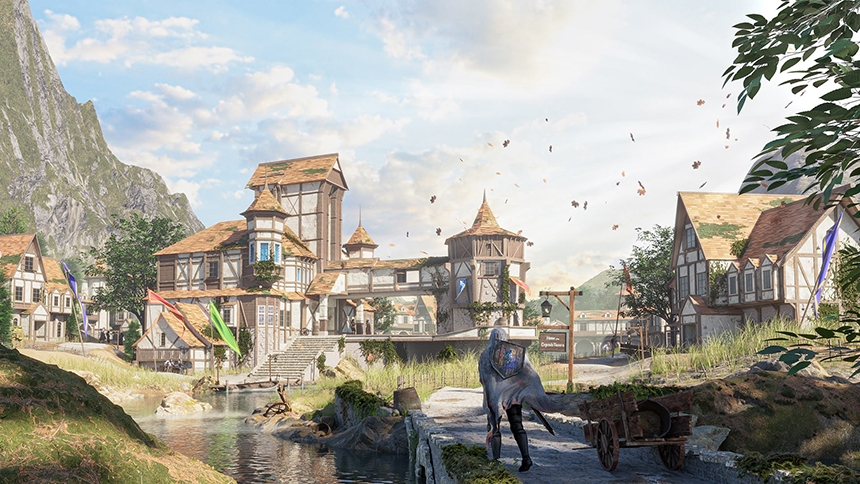 "I wanted to learn more about creating 3D environments. Designing and modeling all the buildings and the tavern was a fun design challenge as well as learning a lot about texturing and creating assets, landscapes, etc. So I used the challenge prompt to compose and sculpt a village around this legendary tavern that sits high up in the mountains.

Epic adventurers from all over gather at this esteemed tavern to tell of their mythical quests, daring expeditions and gather information for future journeys.

But strolling into town is an ominous figure, with blood-stained clothes, a hidden face, and a deadly sword. What could he be up to? Probably just coming for a drink, who knows."

Congratulations to Krzysztof Kolatorski for winning the first place!

"I created this project in 5 days after my daily work. In Blender, I used simple modeling techniques and some physics, cloth and hair simulation for building bricks, bedclothes, curtains and child hair.

The final image was done in Photoshop. I import all render layers (Diff, AO, Depth, Mist, Volume) and added some color correction, photography filter and LUT for a better, cinematic look. On top of that I add High Pass sharpening layer on the final image, what I recommend to use.

What I’ve learned? Simple physics, cloth and hair simulations in Blender, I used it for the first time."

Congratulations to Philip Hofmänner for winning the first place! 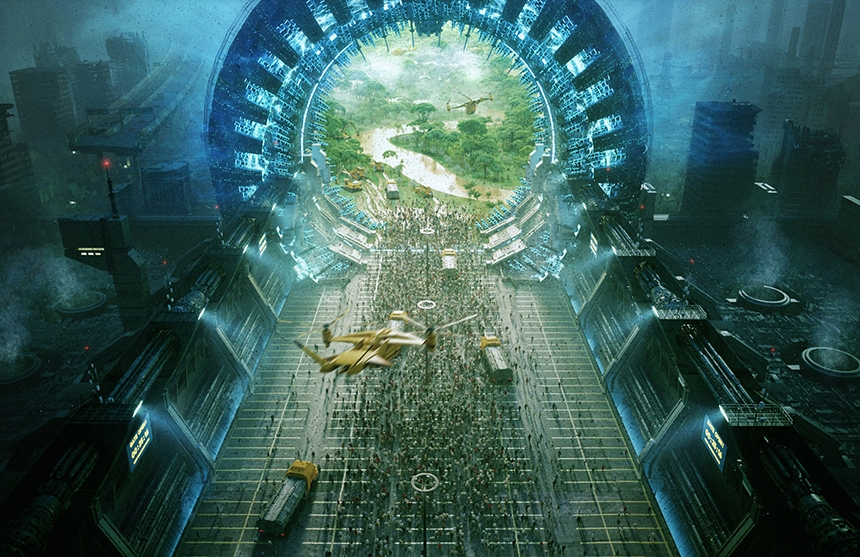 "The world is destroyed, but mankind has found a way to transport itself into the future with a portal. The idea is that nature could have recovered after a few million years. Will mankind take this second chance and do better this time?

I started without a draft directly with a rough model of the portal in C4D. After that I defined an interesting camera composition, and then I built everything else around it.

I’ve been working on this picture in my free time alongside client projects whenever I could find a few free hours. I don’t know exactly how many hours but if I had to guess it was maybe around 20h.

After years of working in the advertising industry and architectural visualizations I wanted to finally build an online portfolio with more personal work. That’s why I participated in this challenge to get some attention. On Instagram and Artstation I will soon upload some stuff. Follow me if you like. Thanks!"

Congratulations to Kay John Yim for winning the first place! 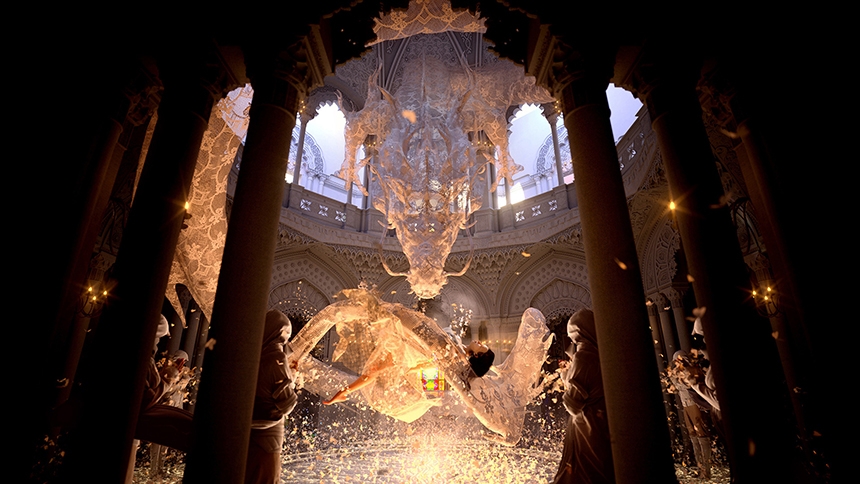 "Magic and alchemy flourished in the early days of the Grand Ducky of Tuscany, when the laws of free of religion were promulgated and the study of science was popularized.

Tuscan folklore has it that the Sammezzano Castle, an Italian palazzo located in the town of Reggello constructed during that period, occupies an incomplete ancient Alchemical door that could be traced back to spiritual alchemy from the Roman times.

The White Rotunda in particular, out of the 365 rooms within the Sammezzno Castle, is overlaid with delicate ornaments shaped like plants and elaborate geometrical carvings. These ornaments are believed to be enchantment symbols that complete the ancient Alchemical door – a gateway where undying spirits were conjured during enchantment ceremonies, possessing mortal “hosts” in return of immortality.

The Sammezzano Castle was abandoned in World War II; the key to immortality may have been left untouched since then, but the undying spirits and immortal “hosts” have been passed on as Tuscan folktales of legendary creatures and vampires living among the rest of mortal beings like us.

This piece marks a huge milestone in my 8 years of CG self-learning journey.

Having to spend more time at home due to the COVID lock-down last year, I set myself a goal to learn, create and post CG art online on a regular basis. I gradually progressed from creating CG architecture to landscape, creatures to human beings. This piece took me about 17 days to finish – my first project completed mostly procedurally. It is a culmination of a whole year of non-stop practice, a CG rendering that embodies every bit of my heart and soul."

Congratulations to Rudi Witt for winning the first place! 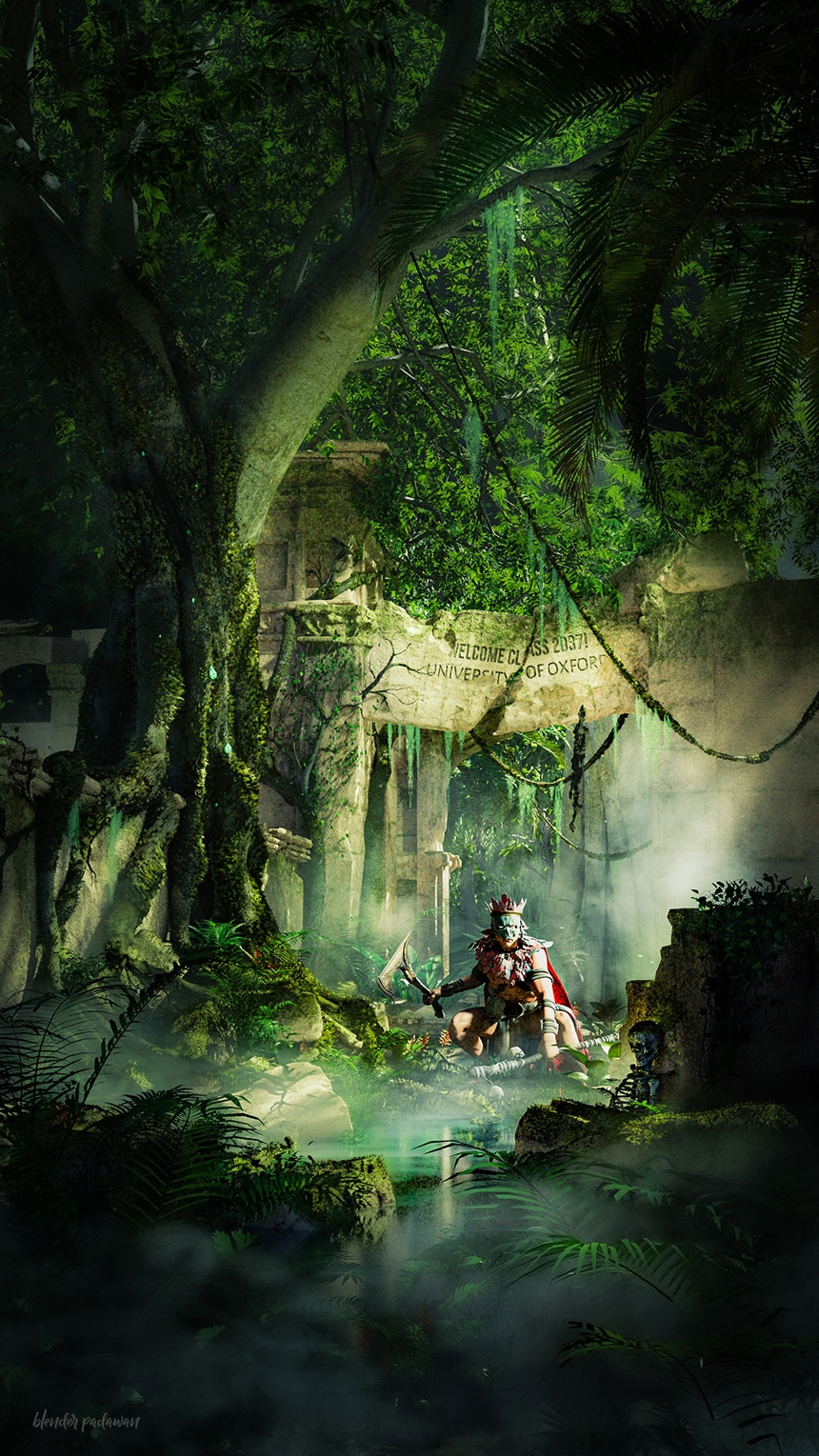 "Future past – No one knows who built these structures of stone or what they were used for. The Wise Ones tell stories of an ancient civilization that vanished from the face of the earth…

I wanted to show the power of nature that works over long periods of time. What would it look like, if we were long forgotten…? I especially enjoyed sculpting the different stone assets and make them look old and eroded.

Most of the fine details are not really visible in the final picture, but the exercise was a lot of fun."

Congratulations to Tushar Soni for being one of the winners! 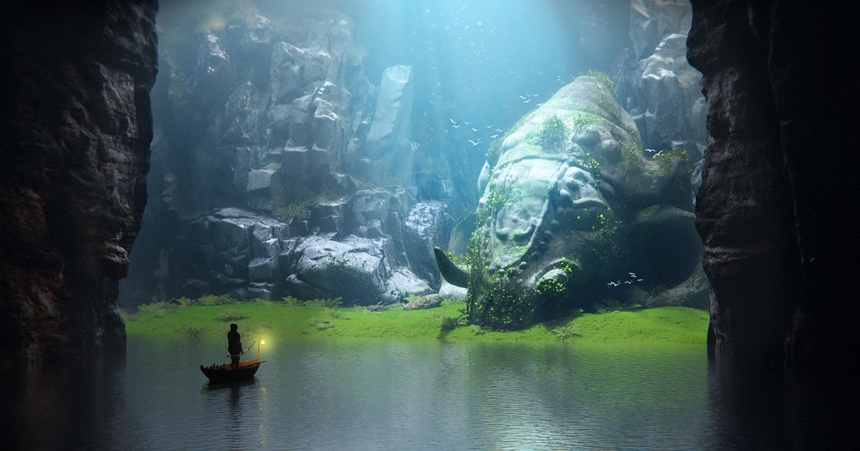 "My idea was to make an ancient underground city, so I searched some references on the internet and after trying a couple of ideas I landed on this idea. It was quite fun and interesting time to work on this project.

I love making volumetric scenes, so I also worked with volumetrics in this scene. Your challenges really helped me a lot in improving my 3D skills."

Congratulations to Alexandru Rusu for being one of the winners! 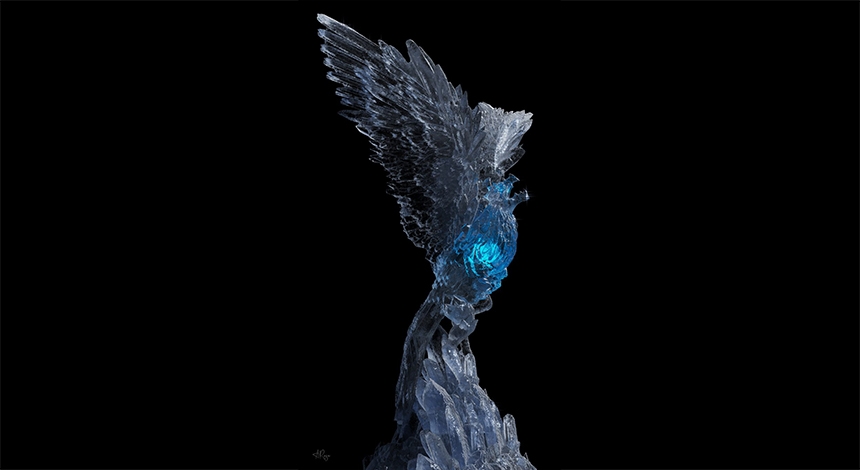 "Among the most mysterious of all flying creatures, much of what is known about the Phoenix exists in often changing legends that have been told through generations. It has been constantly associated with fire, cleansing, and renewal. Yet, in this case, I tried to go for the opposite: a creature consumed by freezing flames, coming from a climate of unforgiving ice and bitter winds.

I created the model and ice texture entirely in Blender. I tried using Octane as a render engine to achieve interesting caustics. Still, I ended up switching to Cycles, as it provided better results (although at 10k samples and 10h render time). As a final step, I used the Compositor and Photoshop to make the image brighter and more vibrant." 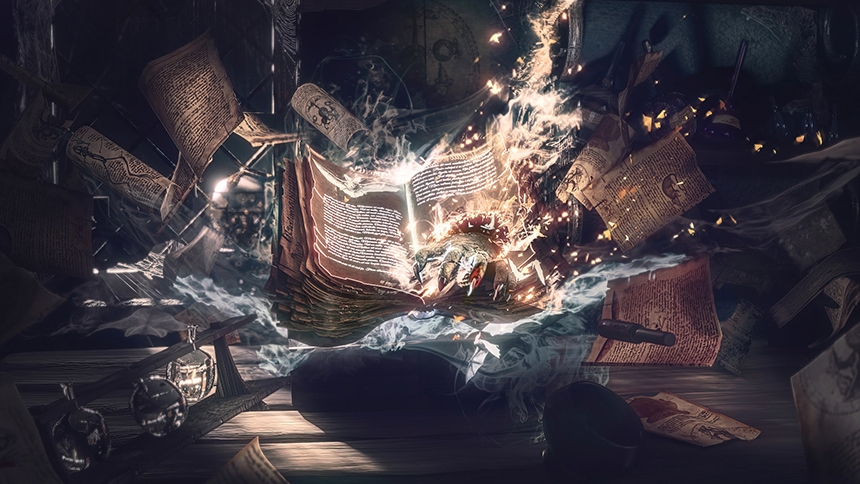 "We just now witnessed an executed spell that went terribly wrong. Inexperienced witch that read this spell page only wanted to get herself a pet. One bat, even better plenty of bats. She did manage to get herself bats but also, hm something else was lurking around…

I’ve created this work completely in Blender using EEVEE. Affinity Photo was used to create textures, and also to enhance colors, color balance, and contrast. Smoke, dust, and spiderweb I did with planes in Blender, which had alpha texture (created in Affinity Photo)."

Congratulations to Raz Freedman for being one of the winners! 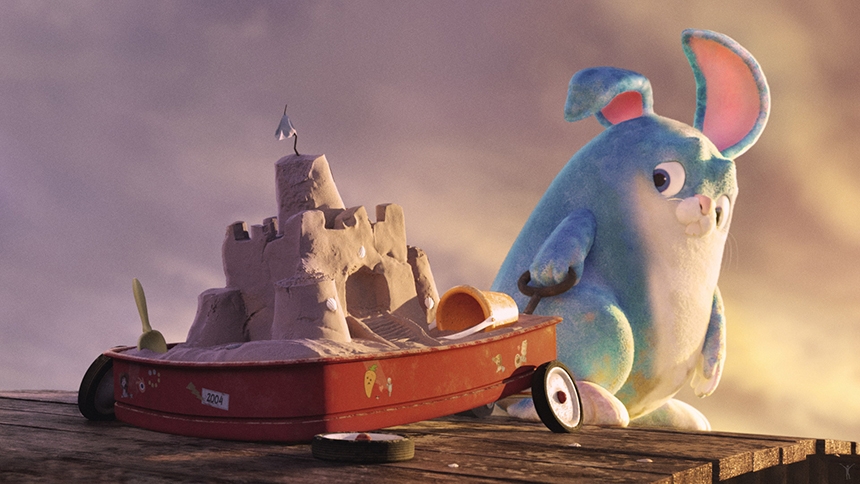 "How the little bunny worked hard on his sandcastle when suddenly…

I created this scene using Blender 2.90 and rendered in Cycles. The sand was a fun challenge for me – from sculpting the crumbling sandcastle to creating a procedural sand texture."

Congratulations to Felipe del Rio for winning the first place! 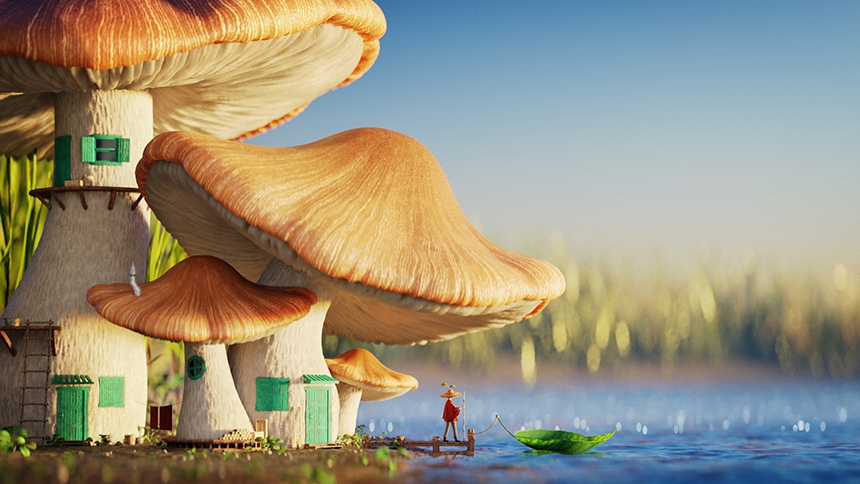 “I changed my idea a lot since I started, but then I decided to create a peaceful image from a mushroom village by the river with a character ready to go for a fishing adventure in a leaf boat.

I made the scene with Blender 2.91. In the beginning, I thought about sculpting the mushrooms, but eventually, I decided to go with a more procedural workflow using modifiers (a bunch of displacement maps and subdivisions) and it was a cool process. I rendered the scene in Cycles and some textures I created in Substance Designer.”